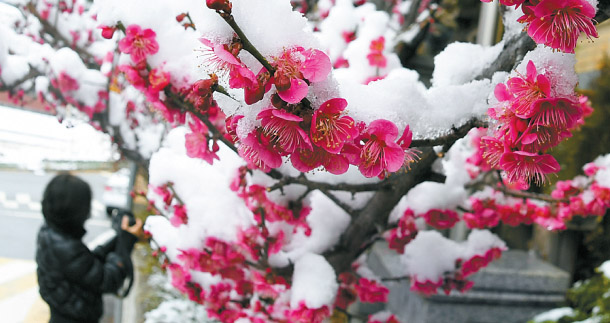 Snow blanketed the country on Wednesday, the first official day of spring, forcing schools to close and traffic to stall in the morning.

The Korea Meteorological Administration issued a heavy snow warning on Jeju Island and in South Gyeongsang on Tuesday night.

Seoul and Gyeonggi saw flurries in the afternoon, though not as heavy as in the southern regions. The Korea Meteorological Administration forecasted the snow to continue into the night, but Seoul and Gyeonggi were expected to see at most 3 centimeters (1.2 inches).

The Daegu city government dispatched about 2,000 public employees and 400 snowplows. The Korea Meteorological Administration forecasted snow of 5 to 10 centimeters or rain of 5 to 20 millimeters in Daegu for the rest of the day.

Snow also fell in the southern port city of Busan, which had not experienced snow in late March for 13 years. Accumulated snowfall in Gijang County measured 0.7 centimeters in the morning.

Roads in several districts of Busan were closed for a few hours in the morning as the city tried to clear them of snow.

Late Tuesday night, the city also experienced strong winds. One utility pole collapsed in Yeongdo District, causing one house in the vicinity to lose power, and a tree fell on some power lines in Geumjeong District, cutting electricity to over 300 households.

Most of the heavy snow warnings were lifted by the afternoon, but the national weather agency said more snow and rain could be expected in the evening, especially in mountainous regions of Gangwon, North Gyeongsang and Jeju Island.

“A low-pressure trough coupled with a cloud band led to the heavy snowfall, but the cloud band thinned in the afternoon, when most of the heavy snow warnings were lifted,” a Korea Meteorological Administration official said Wednesday afternoon.

“But we see the temperature dropping and the cloud band growing, so the rain could change into snow in the evening.”