The Korean women’s curling team failed to advance to the semifinals of the 2018 Ford World Women’s Curling Championship, losing 3-10 to the United States in the qualification game in North Bay, Canada, on Saturday. 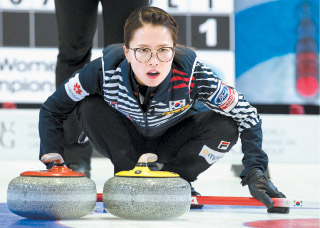 Kim Eun-jung, the skip of the Korean women’s curling team, watches a shot during the 2018 Ford World Women’s Curling Championship at North Bay Memorial Gardens in Canada on Friday. [AP/YONHAP]

The squad, nicknamed Team Kim, hoped to continue the success of Korean curling at the PyeongChang Olympics, but they came up short of the podium. After playing 12 round robin games, Korea advanced in the tournament to the qualification game.

As just one qualification game determined who would go on to the semifinals, both the American and Korean teams stayed cautious throughout. Once Korea won a point in the first end, they allowed a point to the United States in the second.

Then, in the third end, Korea had a “blank end,” hoping to score multiple points in the following end. Keeping the hammer, Korea ended up winning only a point in the fourth end from Kim Eun-jung’s draw shot. The United States wasn’t able to do much either, winning only one point in the fifth to tie the game up at 2-2.

Since neither of the teams were winning big points, the game all came down to the errors. Despite being the hammer in the seventh after a blank end in the sixth, Korea had a steal from Kim Eun-jung’s miss shot, allowing the United States to take the lead 3-2. Due to the steal, Korea once again kept the hammer, but only won a point, tying the game up at 3-3.

Team Kim had to finish the end without giving up a point in the ninth, but instead, they gave up seven points. Kim Kyeong-ae started with a hogline penalty. Then Kim Eun-jung made a successful hit and roll shot, but the U.S. skip Jamie Sinclair responded with a perfect shot. With only two shots remaining, the United States had six stones in the house while Korea had none.

Kim Eun-jung made Korea’s eighth shot, but she wasn’t able to fight off the pressure, as it passed the house. Sinclair then easily landed the United States’ last shot in the house for the team’s seventh point in the end, securing a big win for the Americans.

Despite being tightly locked until the last end, with the two teams tied at 3-3 after the eighth end, the Americans’ seven points in the ninth end took away Team Kim’s chance of advancing to the semifinals.

Of the 13 participating countries, Canada, the host, and Sweden, the gold medalist at the PyeongChang Winter Olympics, automatically advanced to the semifinals as the top two in the round robin round. Korea had the top seed in the qualification game.

Korea finished third among the 13 participating countries in the round robin stage, with eight wins and four losses. By finishing third, Korea was paired against the sixth-ranked team, the United States.

During Korea’s tight game against the United States in the round robin tournament, Korea won 9-8 in the extra end.

Last year, Team Kim finished in sixth place. This was their first international tournament since the 2018 PyeongChang Winter Olympics.