After 18 years, para-hockey captain is ready to hang up his skates

After 18 years, para-hockey captain is ready to hang up his skates

Han Min-su, captain of the Korean para-ice hockey team, said he plans on retiring, ending his nearly two decades of playing for the Korean national team. 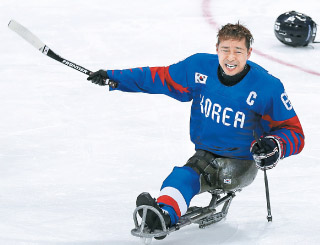 In the PyeongChang Paralympic Games, which ended on March 18, the Korean para-ice hockey team defeated Italy 1-0 to win the country’s first-ever bronze medal in the sport. After the win, the Korean players, overwhelmed with emotion, gathered together and sang the national anthem.

Last Thursday, the JoongAng Ilbo, an affiliate of the Korea JoongAng Daily, met with Han at the Icheon Training Centre in Gyeonggi for an interview.

Han, whose left leg was amputated below the hip due to osteomyelitis, has been one of the team’s key players. He’s been playing para-ice hockey for Korea since 2000.

“Of the population of 50 million in Korea, five percent, or 2.5 million, people are impaired,” Han said. “And 90 percent of them became impaired from an accident. Sports have allowed them to come out to a bright world from anger, frustration and resentment. Just like Jung-hwan said, sports allowed [people to] accept impairment.”

Han spoke about the reality of Paralympic sports and their future in Korea.

Q. Tell us about the game against Italy.

A. We scored in the third period with only 3 minutes and 18 seconds remaining. We were telling each other to keep our excitement down and stay in our positions. I still remember the fans making the countdown and those 10 seconds felt like two hours. Once the national anthem was played, I was busy crying, but later when I looked back, my teammates were all crying as well.

You suggested making a rink specifically for the para-ice hockey team to President Moon Jae-in. Why did you propose that?

We had to look for a rink to practice on, and one time, we got to the rink at one [in the morning], practiced for two hours and went to work at seven [in the morning]. Most of the rinks [in Korea] have high stairs and grounds. It’ll be nice to build a new facility, but just remodeling the rink, getting rid of the higher ground and lowering the transparent fence will allow impaired athletes to use the facility without any difficulties. I want more facilities that both impaired and non-impaired athletes can share to be built.

First lady Kim Jung-sook showed special interest in the team. How often did you see her?

In the past 50 days, I met with her five times. She made wonderful memories with us, cheering for us and crying for us. I said I wanted to give her a gift a day before the game against Italy and I gave her my jersey through my wife. For us, it felt like we found a reliable reinforcement [in her].

After the Paralympic Games, you gained so much popularity that you were like a celebrity. Are there any fans that you still remember?

A volunteer, who seemed to be in his early 20s, asked me to sign my autograph on his back and told me that his father was a para-track and field athlete but didn’t medal. When I met him again after winning a bronze medal, he gave me a letter. It said, “I was never proud of my father. But through Han Min-su and other players, I got to think proudly of my father.” I realized that I was giving hope to someone.

Why are sports so important to impaired people?

As an impaired person, you have to continue on with your life, and sports were a strong driving force. Using crutches, I hiked up to the top of Mt. Seorak. But still, when the time came for me to amputate my leg, I got weaker. When I told a friend, who had to amputate both her legs, about my concerns, she said, “You can now wear a prosthetic leg. You won’t have to use crutches anymore. It’s better than how it is now.”

How do you feel when you see able-bodied people watch people with impairments play sports?

There are a lot of people who encourage our bravery, but there are also people who look at us with some discomfort and feel bad for us. I fully understand. We can’t show off our outrageous performances like able-bodied athletes. But we have a story of hardship and conquest. We train as hard as the able-bodied athletes, so I hope fans share in the fun and the meaning [of sports] with us.

I want to ask them not to look at Paralympic sports from a welfare perspective. I want them to accept them as elite sports. In wheelchair basketball, both impaired and able-bodied athletes sit in a wheelchair to play. I hope able-bodied people can also participate in para-ice hockey.