Read books like a king at Changgyeong Palace library

Read books like a king at Changgyeong Palace library 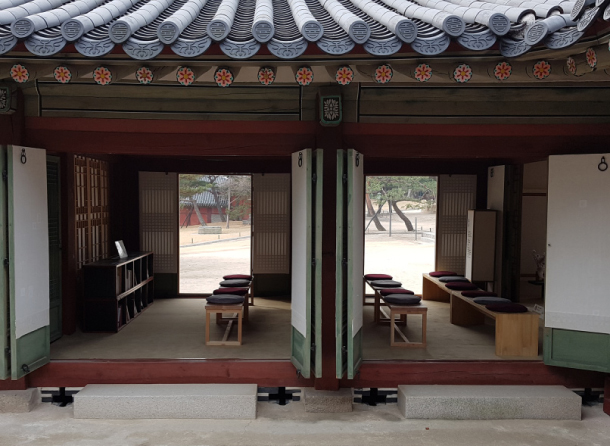 Jipbokheon House inside Changgyeong Palace in central Seoul has recently been turned into a small library, offering about 300 books for the public to enjoy. [CULTURAL HERITAGE ADMINISTRATION]

Reading was a popular hobby for the kings of the Joseon Dynasty (1392-1910). Many of the kings were extensive readers and they often emphasized the importance of reading books. King Sejong, the fourth king of Joseon is known to have spent at least seven hours a day reading books, stressing that “the nation becomes rich and powerful when its people read,” while King Sukjong, the 19th king, is said to have read books all day long. King Yeongjo, the 21st king, is known to have had books at hand in an attempt to overcome his complex of being a son of a maid at the palace while his successor King Jeongjo, the 22nd king, even wrote summaries of books and kept record of how many books he had read.

Perhaps the tranquil ambience of the royal palaces provided the perfect atmosphere to read. Luckily, visitors to Changgyeong Palace in central Seoul can see for themselves as the palace decided to open up its Jipbokheon House on March 20 after turning it into a small library. The library will operate until April 15.

The front and back doors of Jipbokheon House will be wide open, allowing for sunlight to come in and a cool spring breeze to pass through. Visitors can take a seat and read books about palaces and the culture and customs of palace life. There are also books about the signboards of Changgyeong and Changdeok palaces. According to the palace, there are about 300 books on the shelves.

Jipbokheon House is the building connected to Yeongchunheon Hall’s west wing where King Jeongjo spent a lot of time. It is where Crown Prince Sado (1735-62) and King Sunjo (1970-1834) were born and where King Sunjo’s biological mother resided.

“We will continue to open up and reveal more spaces in the palace for the public to enjoy so that they can have hands-on learning experiences about the history while enjoying our cultural heritage,” said an official from the palace.