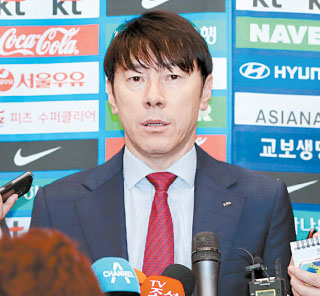 Despite the losses, Shin claimed that the two matches gave them a big help in their World Cup preparations.

“Against the world’s 24th-ranked team [Northern Ireland] and sixth-ranked [Poland], we showed good performances,” Shin told reporters after arriving at Incheon International Airport. “We found our problems by looking at the situations in which we conceded goals, so this will help us prepare well for the World Cup.”

In both friendlies, Korea surrendered decisive goals near the end of the match.

Northern Ireland got their second goal in the 85th minute, while Poland collected the winner in a second-half stoppage time.

Shin acknowledged that his side needs to upgrade their defense, and it will improve before going to Russia.

“Surrendering goals at the last minute must be fixed,” he said. “We lacked concentration at the end of the match, but I think if we keep practicing our defensive plans after we gather the players in May, we’ll see some improvements.”

Against Poland, Shin started with a 3-4-3 formation but switched to 4-4-2 before half time. Shin defended his tactical choice, saying the back-three system is still a good option for the national team.

“We need to have a plan B,” he said. “We only practiced the back-three system for a day, and because of Kim Min-jae’s injury, our backline wasn’t good in the match. But I don’t think our plan B isn’t good.”

“Through these tests, we have to check who should be Son’s partner and how he performs under certain formations,” he said. “We found the formation that will best work for our team, so it was helpful.”

Before the friendlies, Shin said his World Cup squad was about 80 percent complete. The 48-year-old coach said he still hasn’t decided on the remaining 20 percent.

“I have to fill in the remaining 20 percent by reviewing our performance,” he said. “In order to minimize risks at the World Cup, we have to make our final roster carefully.”

Shin said he is still undecided whether he should further check Europe-based players like Suk Hyun-jun of Troyes and Lee Chung-yong of Crystal Palace or other domestic K League-based players who weren’t called up for the friendly matches.

“I don’t think I have to fly to Europe again,” he said. “It’s still 50-50. I’m still thinking whether I should check Europe-based players or other players in the K League.”

The March friendlies were Korea’s last tests before they unveil the roster for the 2018 FIFA World Cup. Shin is expected to announce his 23-man World Cup squad in late May, though the deadline for the submission of the final list of 23 players is due on June 4.

Korea is in Group F at the 2018 World Cup, with Germany, Mexico and Sweden.