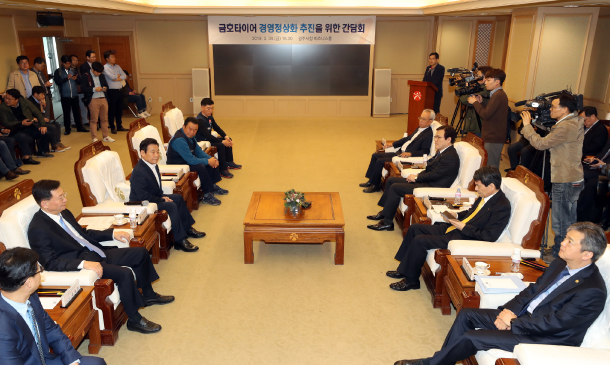 The fate of Kumho Tire took yet another dramatic turn on Friday as the labor union suddenly agreed to hold a vote on a proposed buyout by China’s Doublestar. The last minute change came just hours before a deadline that would have likely seen the indebted tire maker heading into court receivership.

Friday was supposed to be the final deadline set by main creditor Korea Development Bank (KDB) for the union to agree on the proposed takeover by Doublestar, but now that the union has shown possible signs of movement the deadline has been delayed to next week.

If Kumho’s union had maintained its hostile stance against the proposal on Friday, the tire manufacturer would have likely gone into court receivership.

The union’s sudden change of heart prompted government officials and the main creditor to call a last-minute meeting for possible negotiations on Friday.

Major decision makers including Choi Jong-ku, chairman of the Financial Services Commission, KDB head Lee Dong-gull and two representatives from the union gathered at Gwangju City Hall. The unionized members launched a strike on the same day in the city, which led to the 24 hour suspension of the tire maker’s factories in Gwangju and Gokseong, South Jeolla.

Although the union has said that is willing to hold a vote on the proposed acquisition by Doublestar, it hasn’t yet come out with any schedule as of press time.

“The [negotiations] will likely last a longtime,” said a spokesperson from the Financial Services Commission, “And the main topic will be whether and how Kumho’s voting can be conducted.”

But a source from one of Kumho’s creditors told the Korea JoongAng Daily that the government and KDB will likely accept the union’s proposed time frame.

“We expect the outcome to come out either on Saturday or Sunday,” the source said.

“After considering the result, Kumho’s fate will be decided at a board meeting on April 2,” they added.

The creditor bank and government agencies have stressed that the deal with Doublestar is the most feasible way to turn around the tire maker.

Doublestar offered to purchase a 45 percent stake in the Korean tire company for 5,000 won ($4.66) per share, or 646.3 billion won in total. It will make fresh investments in Kumho Tire of up to 200 billion won to upgrade or expand production. It is also guaranteeing workers’ jobs for 3 years and promising to remain the largest stakeholder in the company for five years.

Early on Friday the government, KDB and Kumho’s management once again appealed to the union to give the Doublestar deal the green light.

“The only remaining option will be court receivership unless the management and the labor union reach agreement,” Kim said, “because the company will face a liquidity crisis and the large-scale investment [from Doublestar] comes to nothing.”

KDB President Lee Dong-gull has also said that if Kumho Tire’s deal with Doublestar breaks down and the company goes into court receivership, it is most likely to be liquidated rather than revived through restructuring.

The share price of Kumho Tire was all over the place on Friday, falling more than 12.35 percent in the early morning session before dramatically bouncing back at around 2 p.m. to close at 4,615, 30 percent up from the previous day.