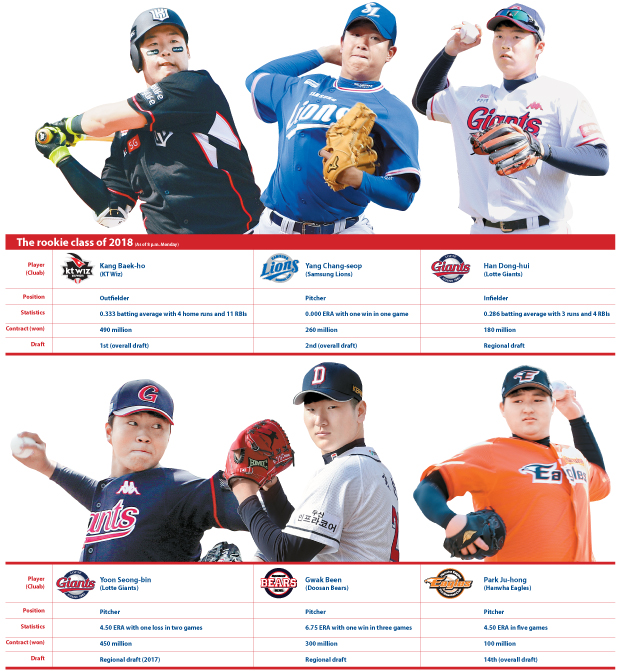 The 2018 KBO rookie draft was one of the most exciting in Korean baseball history, with a class of players graduating to the big league with more skill and potential than ever before. As the season kicked off last week, all eyes were on these superstar rookies to see if they could possibly live up to expectations - so far, they can.

Yang Chang-seop of the Samsung Lions, picked second in the overall draft, appeared on the mound as a starter during the game against the Kia Tigers on Wednesday. Yang successfully picked up a win, throwing six scoreless innings while giving up four hits and striking out two in his debut game in the KBO.

With the victory, Yang became the youngest pitcher in KBO history, at 18 years, 6 months and 6 days old, to pick up a win in the KBO, and the sixth pitcher to do so in his debut game. Not only that, Yang also became the second high school graduate in league history, since Ryu Hyun-jin of the Los Angeles Dodgers, to pitch scoreless innings for a win in his debut game.

On April 12, 2006, Ryu, then of the Hanwha Eagles, tossed seven and one third scoreless innings to pick up a win in his debut game against the LG Twins.

“Though it was my first [game] as a starter, I was more excited than nervous,” Yang said after the game. “I had an effective game by reducing the number of balls, which eventually led to a good result.”

Yang’s successful debut was a surprise to many Lions’ fans, as they were expecting wins from their foreign pitchers - Lisalverto Bonilla and Tim Adleman - who cost the team 700 million ($660,000) and 1.1 billion won each. Comparatively, Yang was a bargain. He signed a 260 million won contract with an annual income of 26 million won.

“It’s amazing that a 19-year-old can throw like that,” said Yun Sung-hwan, a Lions’ pitcher. “Not only for me, but it’ll also be a good motivation for the foreign pitchers.”

Though he was hidden in Yang’s shadow, Gwak Been, drafted in the regional draft, of the Doosan Bears also helped his team to a win during the Bears’ game against the Lotte Giants at Jamsil Baseball Stadium, also on Wednesday. While the Bears were losing 3-4, Gwak appeared on the mound at the top of eighth and tossed a scoreless two thirds of an inning. With Hur Kyoung-min’s two run hit at the bottom of the eighth, Gwak started his professional career with a win.

“We were able to pick up a come-from-behind victory because Gwak Been did well,” said the Bears’ manager Kim Tae-hyung.

And Gwak said he is motivated to play better as Yang, who joined the KBO in the same year, got off to a better start.

The same day, Park Ju-hong, picked 14th in the overall draft, of the Hanwha Eagles also left an impression. During the Eagles’ game against the NC Dinos in Changwon, South Gyeongsang Park got on the mound as a reliever at the bottom of the eighth, when the Dinos had batters on the first two bases with the count only at one out. Though it must have been a nerve-wracking moment for the rookie, Park successfully struck out the next two batters - Choi Jun-seok and Park Min-woo - to conclude the inning without giving up a run.

Yoon Seong-bin of the Lotte Giants is a rookie from the 2017 season, but made his debut this season as he suffered from a shoulder injury. Though he picked up a loss in his KBO debut game against the SK Wyverns in Incheon, he still gave fans some hope, only giving up two runs in five innings.

But it’s not only on the mound that rookies are living up expectations. In the batters’ box, Kang Baek-ho, picked first in the overall draft, has already cemented his legacy. Playing as an outfielder, Kang has had a significant impact on the Wiz with a 0.333 batting average, four home runs and 11 runs batted in (RBI).

Han Dong-hui of the Giants, drafted in the regional draft, also managed to earn his spot on the team, assigned as third baseman. Though he still makes mistakes due to a lack of experience, Han has shown outstanding ability as a batter, with a batting average of 0.286, three runs and four RBIs.

The rookies this year, the majority of them only 19-years-old, are known as the “Beijing Kids” because they first started dreaming of playing professional baseball while watching Korea take gold at the 2008 Beijing Summer Olympics and finishing as runner-ups at the 2009 World Baseball Classic.