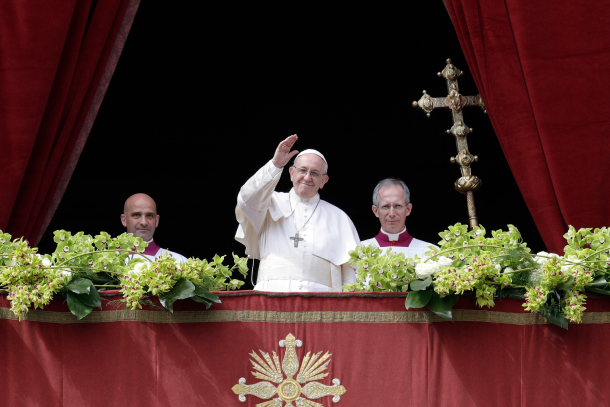 Pope Francis delivers a blessing in St. Peter’s Square at the Vatican on Sunday. [AP/YONHAP]

Pope Francis delivered a message of healing and reconciliation to Koreans on the occasion of the 70th anniversary of a bloody massacre on the country’s southern island of Jeju.

Cardinal Pietro Parolin, the Vatican’s secretary of state, sent a letter to the Catholic Bishops’ Conference of Korea (CBCK), delivering the pope’s message to an event hosted by the Catholic Diocese of Jeju marking the 70th anniversary of the Jeju April 3 Incident.

“[Pope Francis] hopes that this occasion will foster healing and reconciliation,” Parolin said in the letter read out at the event on Jeju. Bishop Kang U-il of the diocese read the letter.

“Entrusting the beloved Korean people to the intercession of Mary, Queen of Peace, His Holiness assures all present of his prayers, that they may persevere in hope,” Parolin was also quoted as saying.

The letter was sent on March 26 to Archbishop Hyginus Kim Hee-joong, head of the CBCK.

More than 10,000 islanders are estimated to have been killed and nearly 3,600 to have gone missing during the government-civilian clash. It lasted from 1948 to 1954 and was an outgrowth of Korea’s ideological division following its 1945 liberation from Japan’s colonial rule.

The Jeju April 3 Incident is now back in the limelight as liberal President Moon Jae-in, who took power last May, pushes to address the grievances of victims of past state abuses. Establishing the truth about the Jeju massacre is one of his 100 major election promises.