Park falls to Swede in California

Park falls to Swede in California 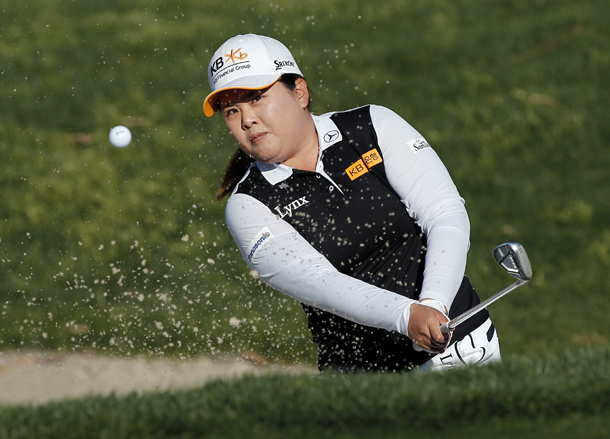 Park In-bee watches her bunker shot during the playoffs at the ANA Inspiration at Mission Hills Country Club in Rancho Mirage, California on Monday. [AP/YONHAP]

Park In-bee played deep into a second day of sudden-death playoffs before losing in the eighth extra hole to Pernilla Lindberg of Sweden at Mission Hills Country Club in Rancho Mirage, California on Monday. 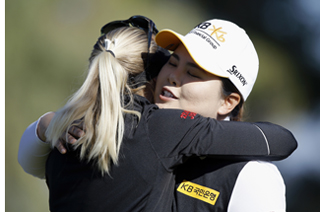 Park In-bee, right, hugs Pernilla Lindberg of Sweden on the 10th green after losing in the eighth playoff hole of the major tournament. [AP/YONHAP]

Park, who started the final round tied for third, made a birdie on the final hole to force a three-way sudden-death playoff with Jennifer Song of the United States and Lindberg. In the first two playoff holes, played on the par-5 18th hole, all three players made par. In the third playoff hole, both Park and Lindberg made birdies and Song, with a par, was eliminated.

As night fell, the playoff on the 18th hole continued under the lights. The two players once again made pars, and the playoff had to be postponed to the next day due to darkness.

Park and Lindberg played the 18th hole four times in the playoffs on Sunday, so on Monday, they played the par-4 10th, par-3 17th and par-5 18th holes. The two golfers both made par on the 10th and 17th holes.

On the par-5 18th hole, Lindberg hit the green in two strokes, but as she missed her birdie putt, the score was tied up again and the competitors had to return to the 10th hole.

In her second attempt at the 10th hole, Park hit the green about five meters short of the hole, similar to where she placed it the first time she played the hole that day. Lindberg’s second shot landed around seven meters from the hole. Despite having to make a longer putt for a birdie, Lindberg put the pressure on Park by making the long putt. Park’s putt fell short, and Lindberg was declared the champion of the Tour’s first major tournament of the year.

“So, I mean, it’s just the putt Pernilla made on the last was a champion’s putt,” Park said. “You really can’t beat that.”

By making the birdie putt, Lindberg became the first golfer since Stacy Lewis of the United States in 2011 to pick up her first Tour victory at the ANA Inspiration. Lindberg, who made her LPGA Tour debut in 2010, hadn’t won a tournament all throughout her professional career until now.

With her victory, Lindberg took home $420,000 in prize money and became the second Swedish golfer, after Annika Sorenstam, to win the ANA Inspiration.

“I’m really happy for her,” Park said. “This one was not an easy major win for her as well. I mean, 8-hole playoff, I’ve never done something like that before either. So, sure, she’ll have a great future and a great championship. Congratulations to her.”

This was the first time ever for three players to play a sudden death playoff at the ANA Inspiration since it became an LPGA major tournament in 1983. It was also the first time that the tournament’s playoff lasted until the next day.

Australian Karrie Webb’s victory in 2006 was considered the biggest come-from-behind victory in ANA Inspiration history. At the time, Webb made an eagle from 116 yards on the 18th hole to make the sudden-death round. Webb defeated Lorena Ochoa of Mexico for the win. In the final round, Webb overcame a seven-shot deficit to force a playoff and win.

Park failed to pick up a 20th career Tour win and second victory of the season. She won the event in 2013, but failed to win the tournament this year for the second time in her career. However, Park still said she was satisfied with her play this week.

“Yeah, I’m really satisfied with the way I’m playing this year, and even if I didn’t win today, I felt like I put up a good play this week all week,” Park was quoted as saying by the LPGA’s website. “Even in the playoffs I didn’t make much mistakes, but I just couldn’t make the putts. The morning greens were a little bit slower than I anticipated, I hit a couple putts short. I had a couple of opportunities. I’m a little bit disappointed, but I’m really happy with the way I played this week.”

Park, whose 2017 season ended early because of a back injury, is making an impressive comeback this season. She already won one tournament, the Bank of Hope Founders Cup, in March, in addition to her runner-up finish this weekend.

Despite finishing in second place, Park still made a big jump in the world standings, moving up six spots to third in the new world rankings released after the tournament.

Park is now the highest-ranked Korean golfer, as Park Sung-hyun and Ryu So-yeon moved down a spot, coming at fourth and fifth.