'Our school teaches about capitalism'

'Our school teaches about capitalism' 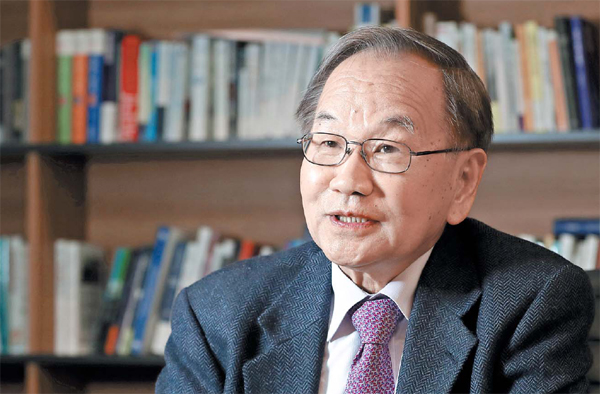 The President of Pyongyang University of Science & Technology (PUST), Chon Yu-taik, is currently banned from teaching at his university.

Chon, who holds U.S. citizenship, has not been allowed to return to Pyongyang after the Donald Trump administration introduced a ban on Americans traveling to North Korea last September, so he now resides in Seoul.

The 77-year-old was born in November 1941 in Pyongyang to wealthy parents who ran a lumber business. But after the outbreak of the Korean War in 1950, Chon defected to the South with his family.

In the South, Chon graduated from Seoul National University with an engineering degree in 1964. He moved to the United States to get his master’s degree and Ph.D. at the University of Massachusetts and spent 30 more years in the United States, working for companies such as NASA and the British oil company BP.

In 2000, Chon heard about the famine in North Korea and wanted to get closer to his birth city of Pyongyang. Three years later, he applied to work as a professor of electrical engineering at Yanbian University of Science and Technology (YUST) in China.

Yanbian is an autonomous prefecture in China, situated above North Korea. It is known as the “Third Korea” due to the large migration of Koreans to the region in the 19th century. Today more than a quarter of the population is comprised of ethnic Koreans.

In 2010, Chon saw a chance to make a difference in the North, and helped create a technical university in Pyongyang. He became a professor and chancellor at PUST. Chon was ultimately promoted to president last March.

PUST is the first and only privately-run university in North Korea, with about 500 undergraduates and 60 graduate students. Qualified professors with a master’s degree in their field of study are encouraged to volunteer their time to teach at PUST.

Thirty other American professors at the university also cannot teach in Pyongyang due to the travel ban.

Chon sat down for an interview with the JoongAng Ilbo, an affiliate of the Korea JoongAng Daily, at its headquarters in central Seoul on March 14 to share his experiences as a university president in Pyongyang.

Q. Do you think you might have a chance to make it to the upcoming PUST graduation?

A. The university’s fourth graduation ceremony is scheduled to take place on March 28. I appealed to the U.S. Department of State to at least grant me a visit to the graduation, but the appeal was denied.


Aren’t visits that are related to humanitarian work allowed?

That’s what I heard, but our school is linked to the detainment of American citizens. Currently, three Korean-Americans are detained in North Korea, and two of them are faculty members of our school. One of them is a professor and the other is an employee at the College of Agriculture and Life Sciences.


Why are they detained?

No official reason has been announced. My guess is that they’re being held for contacting North Korean defectors while they were working at YUST. But I don’t know the exact reason. Before they solve this problem, I don’t think the U.S. government will allow me to visit. I hope everything can be resolved before the U.S.-North Korea summit so I can return to my school.


Is the school facing difficulty due to the sanctions on North Korea?

The greatest hardship we face is that professors from the United States can’t go to the school. We also have a problem with bank remittances. Because banks have been shunning wire transfers, the school had to halt construction of the medical school building. We are directly collecting money we urgently need through another person. We’re also having a hard time because we can’t get clearance for some equipment to carry out experiments.


Does it cost a lot to operate the school?

It’s not as much as you think. Including the cost for room and board for the 900 students and professors, it costs about $60,000 a month in operation costs. But of course that is the minimum operation cost if we save a lot on other things. That’s why our food isn’t that great.


How is the school funded?


Have the sanctions caused any controversy between PUST and the North Korean government?

Not exactly. Our school teaches about capitalism in the middle of Pyongyang.
After learning about capitalism, smart North Korean youths who come out of the school four years later might be thought of as a threat to the North’s system. Because of these concerns, from the beginning there were rumors that our school wouldn’t last long. But now, people are changing their views, saying that it’s important to know about the outside world. With this change, it seems like the North Korean government has also become more understanding. Since American professors can’t enter, some might use this chance to close down our doors. But there are others who are waiting for our return even more than we are.


Do you see any changes in students through their education at PUST?

Their facial expressions change in comparison to their first day. In the beginning, they are wary of us and have their guard up, and they are unnecessarily defiant. But after seeing us every day, they realize that we aren’t bad people like they were taught. When England’s BBC News came to report on us, one student said in an interview, “Though I don’t like the U.S. government, I like American people.” Students are touched by faculty who come from abroad and volunteer all their knowledge and love to them. When they graduate, students and professors start crying because of the relationships they’ve developed over the years.


Do you think that South-North relations are loosening?

I knew it would happen someday. If you go to the biggest marketplace in Pyongyang, where 2,000 salesmen gather to sell their goods, you can feel that North Koreans genuinely want the two countries to make up and compromise. If South-North relations and North-U.S. relations thaw, it would also be very helpful to our school.


It’s surprising that there are professors who volunteer to teach in such a harsh environment. Could you speak more on that?

A majority of professors have their doctorate degrees and used to work for prestigious universities or agencies. Most of them are also Christians. For overseas Koreans who come back to teach here, I just assume that they are doing it because they’re still our compatriots. But I can’t help but admire foreign professors who work harder than us in such an inauspicious atmosphere.


Where do you think they find the strength to do so?

It’s the students. Our students are innocent, yet intelligent. They don’t miss anything and try to learn everything they can. They also continuously ask questions. They are so passionate about their studies that if we assign a single group project for three people, they will bring back three different reports. Because their ability to process information is also outstanding, there are times when some professors get confused when they end their lessons earlier than expected. When they get used to students like that, they may not feel like they’re enduring any hardship. We also have some professors who bring their friends back after teaching here.


The North’s government is in charge of selecting the students. Do you have any complaints about that?


Are students allowed to browse the internet without restrictions?

At the computer building, they have unlimited access. Sometimes they even search on Google or South Korean sites to find sources for their assignments. But usually — perhaps out of pride — they try not to use materials from South Korea.


Is there a big supply of laptops at the school?

Almost every student has a laptop. There are also many students with tablet PCs.


Does the school face any problems with teaching courses in English?

Generally, students who are already familiar with English are admitted, and on top of that, first-year students only learn English. For students falling behind in English, we also provide special tutoring. There are also rumors that our graduates’ English skills are better than graduates from Pyongyang University of Foreign Studies.


How is PUST in comparison to Kim Il Sung University?

Almost half of our students went to Kim Il Sung University or other colleges for two years before enrolling at our college as first-year students. These days we get a lot of students directly out of well-known North Korean high schools, and some are very talented.


What kind of careers do graduates of PUST pursue?

Some graduates remain at the school and work at the research centers and there are some who teach at other universities. There are also a number of graduates who find jobs at banks, insurance, finance or international trade companies.


What do you hope for the school’s future?

There are many professors in South Korea who also wish to teach at our school. I hope South-North relations improve soon and that those professors can come to PUST. I think that will take our education to another level. It would also be nice if the bank remittance issue got resolved and we could finish construction of our medical school. Though some people think our school is training hackers, it’s not true at all. If our intelligent youth have a morally right worldview, wouldn’t it also be helpful in the unification process?