FC Seoul, one of the traditional powerhouses in the Korean pro football league, is suffering from early season struggles as it is winless in its first five matches in 2018. 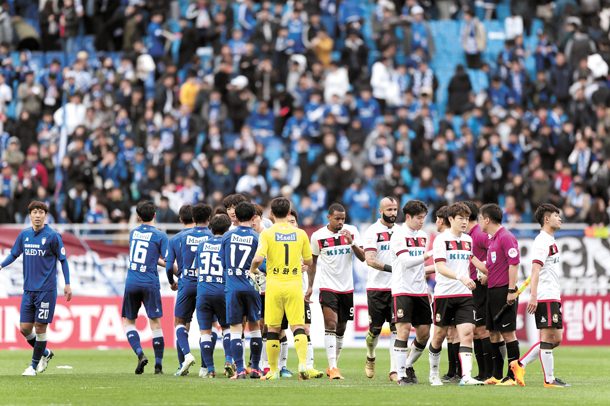 Ulsan Hyundai, in blue, and FC Seoul leave the field after a scoreless draw at Suwon World Cup Stadium in Gyeonggi on Sunday. [K LEAGUE]

Seoul, six-time K League 1 champions, failed to end its winless drought against its archrival, the Suwon Samsung Bluewings, on Sunday as the two sides played to a scoreless draw.

With the latest result, Seoul sits at 11th place among 12 clubs in the K League 1 with three draws and two losses. Daegu FC is the only team behind them.

Seoul’s poor performance is somewhat shocking considering its reputation in the K League 1. Since 2010, Seoul has won the league title three times and never finished below fifth place in the standings.

Hwang joined Seoul in the middle of the 2016 season after his predecessor Choi Yong-soo left for China’s Jiangsu Suning. He eventually led Seoul to win the league title in that season and reach the semifinals at the Asian Football Confederation (AFC) Champions League.

Hwang, however, failed to meet fans’ expectations next season as Seoul finished in fifth place. For this season, he decided to rebuild the squad, releasing key players like Dejan Damjanovic, Osmar Barba and Yun Il-lok. Damjanovic later signed with Suwon, while Osmar and Yun decided to play in Japan.

Seoul has been traditionally a slow starter. In 2013, it failed to collect a single win in the first seven matches but managed to end the season in fourth place. In 2014 and 2015, it earned its first win after playing four matches.

Pundits, however, claim Seoul could see worse results this season.

“It just looks like the squad rebuilding has failed,” said Kim Dae-gil, a commentator for KBSN. “It will be difficult for Seoul to escape from this slump without reinforcing the squad in the second half.”

What looks to be urgent for Seoul is boosting its firepower. In five matches, Seoul has only netted three goals, which were scored by former Arsenal man Park Chu-young, Brazilian forward Evandro Paulista and newly signed midfielder Kim Sung-joon.

“Hwang wants to show his style of football like he did with Pohang but apparently he doesn’t have the players to fulfill his needs,” Kim said. “Since his team has shown bad consecutive performances, the players are also having a difficult time recovering.”

Seoul will try to end its winless streak and turn the tables when they host No. 3 Pohang Steelers on Wednesday. For Hwang, it’s a clash against his old team. He achieved a double victory in the league and domestic cup with Pohang in 2013.