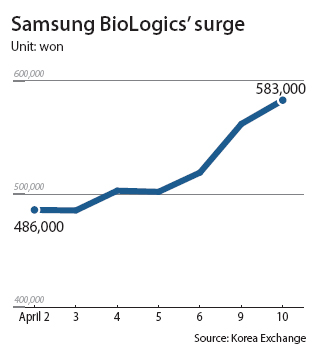 Samsung BioLogics, a biopharmaceutical affiliate of Samsung, emerged as the third-largest player on the country’s main bourse Kospi, backed by expectations around upcoming sales of the unit’s biosimilar and a potential share purchase by Samsung C&T, the group’s de facto holding company.

The major trigger for the rise was multiple news reports late Monday that Samsung C&T is considering raising up to 3 trillion won to buy a 30 percent stake in Samsung Bioepis, a subsidiary of BioLogics. This means that the standing of both Kospi-listed BioLogics and non-listed Bioepis could be elevated in the group since they will be more directly controlled by Samsung C&T, whose top shareholder is Lee Jae-yong, heir apparent of Samsung.

Samsung C&T denied the report, saying there is no plan.

“Samsung C&T is looking into various ways to secure future growth engines, but the firm is not currently planning to buy a stake in Samsung Bioepis,” it said in a statement.

Samsung C&T holds a 75 percent stake in Samsung BioLogics, while Bioepis is 94.6 percent owned by BioLogics, according to the latest filing on the electronic disclosure site.

Despite the denial, the share price of BioLogics continued to surge, hitting an all-time high of 600,000 won during trading. It closed at 583,000 won, up 3.74 percent from the previous trading day.

Analysts see that the upturn is also linked with a favorable legal settlement earlier this month, which allows BioLogics to sell Imraldi, a biosimilar of Humira. Humira is a treatment for rheumatoid arthritis, psoriatic arthritis and Crohn’s disease.

“On April 5, Samsung Bioepis reached a settlement with AbbVie over patent litigation over Humira by finalizing a licensing agreement,” said Kevin Jin, an analyst at Korea Investment & Securities. “Under the deal, Bioepis will be able to sell Imraldi from October 2018 and pay royalties to AbbVie.”

Jin went on to paint a positive outlook for the sale of Imraldi in Europe.

“Imraldi and Amgen, a competing drug, will be the first biosimilar versions of Humira released in Europe. Humira is a top-selling global drug with 2017 sales of $18.9 billion,” the analyst said, adding that he forecasts “Imraldi will bolster earnings by generating the highest peak sales among Bioepis’ portfolio.”

Humira generated an estimated $6.1 billion in sales from Europe, topping competing autoimmune disorder treatment Enbrel at $1.4 billion and Remicade’s $800 million, according to Jin.

BioLogics is a newcomer on the Kospi, debuting in November 2016.