Hall of Famer Park In-bee came up short of winning her second LPGA tournament of the season, finishing tied for third at the Lotte Championship Presented by Hershey in Ko Olina, Hawaii, on Sunday. 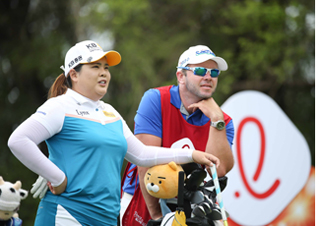 Park In-bee lines up her shot during the final round of the Lotte Championship at the Ko Olina Golf Club in Hawaii on Sunday. [YONHAP]

Under strong island wind conditions, Park, who started the final round tied for third, finished the tournament at seven under par with four bogeys and four birdies. A round of even par kept Park tied for third and put her short of victory at the tournament once again. Three years ago, Park finished runner-up at the Lotte Championship after losing the sudden-death playoff to Kim Sei-young. At the time, Kim made an eagle in the first playoff hole to win the tournament.

Playing the final round two shots behind the leader, Brooke Henderson of Canada, Park played an unusually inconsistent round. She started with a birdie but alternated bogeys and birdies on the third to sixth holes.

That left Park two shots behind Henderson going into the seventh, but she fell further behind as she struggled to make birdies.

Redemption seemed at hand on the par-four 15th hole, when Park made a birdie putt about 6 meters (19 feet) long and got herself one shot behind Henderson.

Henderson, however, didn’t give Park a chance, extending her lead to two shots with a birdie on the par-five 14th. Park finished with back-to-back bogeys on the last two holes with three putts, dropping to five shots behind Henderson.

“I didn’t play bad, but I think I missed about three to four putts that were less than 1 meter long,” Park said after the round. “With this putting, I can’t win.”

Henderson of Canada won with 12 under par. It was her sixth LPGA win. Azahara Munoz of Spain finished runner-up with 8 under par.

“My sixth win on Tour continues to be a dream come true,” Henderson was quoted as saying on the LPGA website. “Watching Pernilla [Lindberg] win a major was a lot of motivation. She showed a lot of grit and I thought, ‘I could do that, too,’ so I owe a lot to her.”

A win or sole runner-up finish could have allowed Park to move back to No. 1 on the Rolex Women’s World Ranking for the first time since 2015. But since Feng Shanshan, the current No. 1, finished tied for third at 7 under par, she will maintain the spot.

Park, who achieved a career Grand Slam in 2015, reached the top spot in the world ranking for the first time in April 2013 and held the ranking for a total of 92 weeks. The last time she was at No. 1 was October 2015, before Lydia Ko of New Zealand took the spot.

Last week, Park missed a shot at winning her 20th career tournament at the ANA Inspiration, losing to Pernilla Lindberg of Sweden in the eighth playoff hole.

Although Park once again came up short of winning this week, she is making a great comeback on the Tour this season. Park has already won a tournament, the Bank of Hope Founders Cup in March, and with great finishes, she is ranked first in the Race to CME Globe points standing.

Ji Eun-hee was the second-best finisher among Korean golfers at the Lotte Championships, finishing tied for 11th at 3 under par along with KLPGA Tour golfer Kim Ji-hyun who played under invitation.

The other KLPGA Tour golfer, Lee Jeong-eun, finished tied for 16th at 2 under par.

Starting Thursday, the LPGA Tour will continue at the inaugural Hugel-JTBC LA Open in California.