The SK Knights are just one game away from winning this year’s Korean Basketball League Championship. 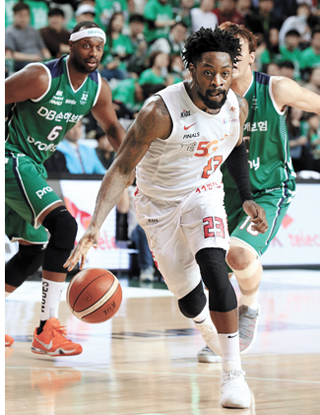 Terrico White of the Seoul SK Knights, in white, dribbles the ball during a Korean Basketball League Championship game at Wonju Gymnasium in Gangwon on Monday. [YONHAP]

On Monday, the Seoul-based team defeated the Wonju Dongbu Promy 98-89 in the fifth game of the series at Wonju Gymnasium in Gangwon.

The championship is played in a best-of-seven format. The Knights lost the first two games but won the next three to get ahead of the Promy. Now, they are just one win away from the pennant.

Just by the statistics of the previous champions, it is very likely that the Knights will win this year’s championship. Eight out of 10 teams that have won the fifth game ended up winning the series.

For both teams, it would be a long-awaited victory. If the Promy win, it would be their first in 10 years. For the Knights, it’s an even longer wait - 18 years.

The 98 points that the Knights scored was the highest in the series so far, thanks to their plentiful three-pointers. Out of 27 three-pointers in the game, the Knights made 15, eight of which were scored in the third quarter alone.

Up until the fourth championship game, the Knights had struggled to score more than 10 three-pointers in a game.

“In short games, I thought it would all come down to three-pointers,” said Moon Kyung-eun, the Knights’ head coach. “Having [players] practice [three-pointers] until I saw some achievement is paying off.”

After finishing the first half up 46-42, the Knights quickly extended their lead in the third quarter with Choi Jun-yong and James Mays taking the wheel.

By the fourth quarter, the Promy were behind the Knights by just one point. Though Doo Kyung-min and Deonte Burton made valiant attempts to catch up, their efforts were in vain.

Up until the third game, the cards were in the Promy’s favor. After all, they had Burton, the Milwaukee native who has dominated the Korean Basketball League. The championship has been derided as the “Burton Series” because so many games have come down to whether Burton scores more than 30 points or not.

In the first two games, which the Promy won, Burton scored 36 points and 39 points. Afterward, the Knights re-evaluated their game plan. From the third game onward, they focused on blocking Burton.

In addition to two defensemen, the Knights assigned Choi Won-hyeok to focus just on Burton throughout the game, and that lowered the success rate of the Milwaukee native’s shots. In the third and fourth games, Burton was unable able to score more than 25 points. The Knights ended up winning both games.

Their anti-Burton strategy worked well in the fifth game, too. Burton scored 28 points, 24 of them in the first three quarters.

As the championship drags on, the Promy are at a huge disadvantage. Their starting players - Doo Kyung-min, Yoon Ho-young and Kim Joo-sung - are suffering from minor injuries and getting tired on the court.

“There isn’t a single player that is not injured,” Lee Sang-bum, the Promy’s head coach, said after the fifth game. “I feel bad for telling them to play, but if we lose another game, we won’t get another chance. We’ll give it our all in the next game.”

The sixth championship game, possibly the last depending on the result, will be played today at the Knights’ home base in Jamsil Students’ Gymnasium.