Ski body to put athletes on review after protest

Ski body to put athletes on review after protest

Korea’s ski body said Wednesday that athletes who publicly criticized its Olympic team selection earlier this year will be put on disciplinary review for their actions. 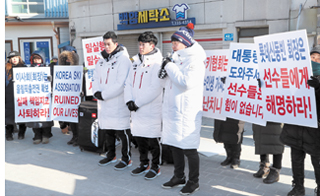 Three alpine skiers and their supporters protest against the Korea Ski Association in PyeongChang, Gangwon, on Feb. 4. [YONHAP]

The Korea Ski Association (KSA) said the skiers who condemned the team selection for the PyeongChang Winter Olympics in Gangwon will be investigated by its disciplinary committee to decide whether they are subject to punishment.

“Ahead of the PyeongChang Olympics, some athletes made untrue claims through media interviews and their social media,” an official from the KSA said. “We’re trying to review those actions through a discipline committee to find out whether they are subject to punishment.”

The KSA came under fire for its selection process and for informing skiers of their exclusion close to the Feb. 9 to 25 Olympics.

The KSA announced a list of four alpine skiers - two men and two women - for the PyeongChang Winter Olympics in late January. The KSA had picked nine skiers for a training camp, hoping they would all get to compete in the Olympics, but apparently five of them were cut from the team at the last minute.

Among them was Kyung Sung-hyun, who missed the selection even though he attended the national team launch ceremony wearing Korea’s Olympic uniform.

Kyung and some of the skiers later filed a court injunction against the KSA to suspend its national team selection and staged protests on the streets in Pyeongchang, Gangwon. Their injunction request, however, was rejected by the court.

“It’s already frustrating to not compete at the Olympics, which I had spent the last four years preparing for, but now the association is trying punish me,” said one skier who asked not to be named.

The KSA is reportedly considering levying punishment on three skiers who participated in the protest in the Olympic host city.

“We’re not trying to punish these skiers just because they criticized our decision,” the KSA official said. “Some of them denounced the skiers who competed at the Olympics and KSA officials publicly through media interviews and their social media, so we want to check the facts and review whether we should mete out punishment or not.”

The KSA will hold its disciplinary committee meeting next Tuesday.

The KSA is also dealing with the two mogul skiers who were banned for life for assaulting teammates after drinking during an international competition in Japan last month. Choi Jae-woo and Kim Ji-hun received lifetime bans for their misdeeds, but the two recently filed an appeal to the Korean Sport & Olympic Committee to review the KSA’s decision.