Jeonbuk Hyundai Motors coach Choi Kang-hee will try to become the head coach with the most-ever wins in the top Korean football league this week when his team meets Gangwon FC. 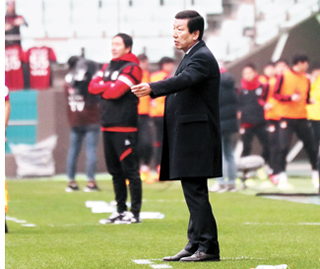 Choi collected his 210th win in the K League 1 on Sunday following Jeonbuk’s 1-0 win over Jeju United. The latest result made Choi’s win record in the K League equal to that of former Ulsan Hyundai head coach Kim Jung-nam.

If Jeonbuk collects a win against Gangwon at Songam Stadium in Chuncheon, Gangwon, tomorrow, Choi can edge out Kim to become the most successful coach in K League history.

Choi is already considered one of the most decorated football coaches in K League history. Since he first took the helm of Jeonbuk in 2005, Choi has amassed five K League 1 titles, the most of any coach, in addition to one Korea Football Association Cup trophy and two Asian Football Confederation (AFC) Champions League crowns.

Choi first won the K League title in 2009 with a record of 19 wins, eight draws and seven losses. Since then, he has collected at least 20 wins every season except from 2012 to 2013, when he was in charge of the Korean national football team.

A win over Gangwon would cement Choi’s status in the K League history books. Since Kim retired from coaching after 2008, Choi’s record is likely to remain for a long time. Among active football coaches in the K League, FC Seoul boss Hwang Sun-hong is next behind Choi with 162 wins.

Jeonbuk are in a good shape to grab a win against Gangwon. The defending champions are on a six-game winning streak to stay atop the league standings and have yet to concede a goal in their last five K League 1 matches.

Gangwon, however, will try not to be the victim in Choi’s record breaking run. The club, led by Song Kyung-sub, will headline their formidable attackers Uros Deric and Lee Keun-ho.

Uros Deric is currently the top scorer in the K League 1 after netting seven goals in eight matches. Lee is the league’s top helper with four assists.

Choi will try to collect his 211th win against Gangwon since their next K League 1 match on Sunday is against the league’s second-ranked Suwon Samsung Bluewings.