The first month of the 2018 KBO season has been a dramatic one, both on and off the field. 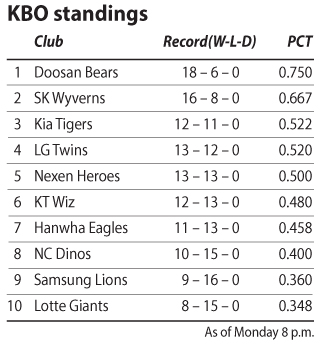 The Doosan Bears continued their winning streak until Sunday, when the Kia Tigers stopped the Bears in their tracks with a big 14-4 victory at Jamsil Baseball Stadium in southern Seoul. The Tigers were explosive at bat, with all their batters in the starting lineup making at least one hit throughout the game. The Tigers made 22 hits, including three home runs. Pat Dean picked up his second win of the season by giving up one run in seven innings.

The Wiz successfully concluded their weekend series with a 6-4 win against the Lions on Sunday. After the Lions took away the Wiz’s lead at the bottom of seventh at 4-3, Mel Rojas hit a solo home run against Choi Chung-yeon to tie the game. Park Kyung-su hit another to secure the win.

The SK Wyverns redeemed themselves after losing the first two games over the weekend, concluding their series with a big 10-4 win against the Lotte Giants. Na Ju-hwan led the team with his personal record of seven runs throughout the game. Despite having the highest batting average for the month of April, the Giants once again struggled with their pitchers, ranking last in team ERA at 5.81.

Over in Masan, South Gyeongsang, the LG Twins, who were fined for stealing signs from the Kia Tigers’ catcher last week, swept their weekend series against the NC Dinos. With three wins against the Dinos, the Twins maintained their spot at fourth. The Dinos have kept their spot at eighth despite four straight losses.

The Nexen Heroes also swept their weekend series against the Hanwha Eagles in Daejeon. Esmil Rogers concluded the Heroes’ weekend series with a big 10-1 win against his former team on Sunday. With another loss, the Eagles are in a worse losing streak than the Dinos, at five.

The Hanwha Eagles’ young fireballer Kim Jin-wook made a successful KBO debut on Friday against the Heroes. 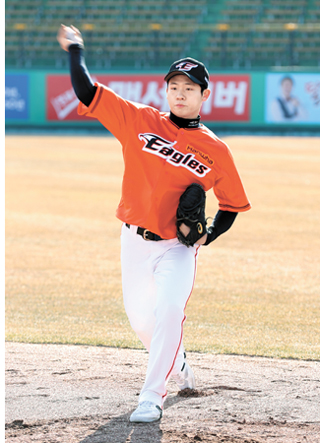 Kim got on the mound at the top of the ninth when the Eagles were losing 1-6. Making a total of 11 pitches, Kim tossed a scoreless inning with one strikeout. The 18-year-old took down Heroes’ slugger Michael Choice and struck out Kim Min-sung with a big curveball pitched at 147 kilometers per hour (91 miles per hour). Not only that, Kim also impressed the fans as his fastest pitch was recorded at 151 kilometers per hour. Though the Eagles lost the game 1-6, Kim’s debut has excited fans for the upcoming season.

“He was a lot better than I thought,” said Eagles’ manager Han Yong-duk. “I would have to see his pitches when there are batters on base, but he had a big angle of curve in his curveballs. We need to keep on producing young pitchers like [Kim Jin-wook].”

During the 2018 KBO rookie draft, Kim was drafted 94th, seventh last, by the Eagles. Though he barely got drafted at all, Kim quickly proved his ability and was added to spring training. Kim initially failed to get his name added to the KBO entry but, just a month into the season, he was called up and made his debut.

“I thought I wasn’t good enough to be in the professional league,” Kim said. “But once I got drafted, I just told myself that I should work harder.”

The successful debut of other rookies this season may have motivated Kim to work harder. Prior to making his professional debut, Kim always wanted to pitch against Lee Yong-kyu. As they are on the same team, Kim now hopes to one day pitch against Lee Dae-ho.

He may just get the chance - the Eagles are scheduled to play the Giants in the coming weekend series, starting Friday.