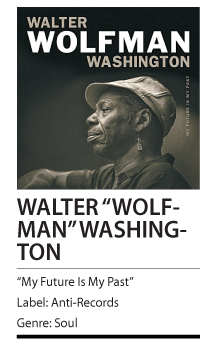 Inside a New Orleans studio, Walter “Wolfman” Washington takes a sip of his drink, puts the glass down - ice cubes percussively chinking - and strums an acoustic guitar while singing about the unwanted consequences of a “wild romance.”

After “Lost Mind,” Washington invites drummer Stanton Moore, pianist David Torkanowsky and bassist James Singleton to join him. Washington puts his guitar down for “What a Diff’rence a Day Makes,” accompanied by Singleton and Mike Dillon on vibes and percussion, but picks up an electric one for “Save Your Love For Me.”

The funk in Johnny “Guitar” Watson’s “I Don’t Want to Be a Lone Ranger” is condensed and filtered through Jon Cleary’s Hammond B3 and Washington’s elastic solo, while Moore and Singleton return to help add urgency and speed to “Steal Away.”

“My Future Is My Past,” produced by Galactic’s Ben Ellman, wasn’t recorded in a single session but it’s fun to imagine it was, because that’s how fresh and cohesive this magnificent album sounds and feels.