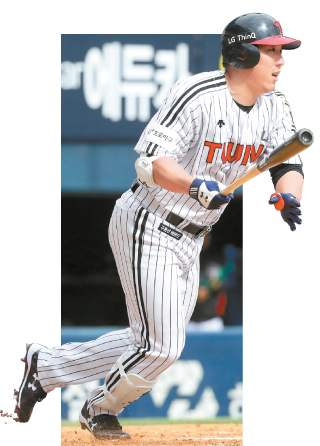 LG Twins’ Kim Hyun-soo starts to run during a game against the KT Wiz last Sunday at the Jamsil Baseball Stadium in Seoul. [YONHAP]

The second batter in the lineup is no longer the sacrificial lamb there were once thought to be.

Traditionally, second batters were contact hitters with the ability to bunt or sacrifice. Their primary role was to get the leadoff hitter into scoring position, often sacrificing themselves to ensure the first batter moves around the bases.

That perception slowly started to change in the late 1990s, as statistics took on a bigger role in the locker room. According to sabermetrics, or the interpretation of baseball records through statistical analysis, the two best batters on the team should be assigned in the second and fourth spots in the batting order.

Specifically, the batter with the highest on-base percentage should be assigned second, while the one with the highest slugging percentage should be assigned fourth. The analysis stated that beefing up the second and fourth spot would add five to 10 more runs per season. Suddenly sacrificing the second batter didn’t seem like such a good idea after all.

Since the second batter is likely to have 17 to 18 more at bats than the third batter throughout the season, a stronger second batter will increase the number of opportunities to score runs.

Second batters had the third highest on-base plus slugging (OPS) percentage in the major league last year, after third and fourth batters. This trend has continued so far this season - the average OPS of second batters in the American league is at 0.783, while in the National league it is at 0.764.

Michael Trout of the L.A. Angels is further proof of the importance of the second man in the batting order. Trout, who has been assigned as the Angels’ second batter in all 23 games this season, is the MLB’s home run leader, with nine this season.

Trout isn’t the only player proving that second in the batting order is the place to be. Giancarlo Stanton of the New York Yankees, who led on home runs in the major league last year at 59, was assigned as second batter in 110 out of 159 games last season while playing for the Miami Marlins. The Chicago Cubs and the Toronto Blue Jays also have dominant second batters.

“I think the other teams are following my approach of assigning a strong batter second [in the lineup],” Ryu said. “A strong team is the team with strong second the sixth batters. When I assign the second batter, I look at their slugging percentage.”

Ryu, who took the Samsung Lions to five Korean Series finals while he was the manager between 2011 and 2016, has long favored the strong second batter approach. While with the Lions he regularly assigned Park Han-yi, Yamaico Navarro and Park Sok-min to the second batter spot.

“If Yang Joon-hyuk was still active, I would have assigned him as the second batter,” Ryu said.

Ryu has been assigning Kim in second as much as possible this season. When Adonis Garcia was injured on April 17, Kim was moved to fourth. When Garcia returns Kim will likely move back to second.

KT Wiz manager Kim Jin-wook has assigned super rookie Kang Baek-ho as second batter. As of Tuesday’s game, Kang has a batting average of 0.274 with five home runs and 19 RBIs. But Kim is less concerned about having a strong second batter - he just wants to make sure that Kang is in a position where he can be propped up by other strong players if the pressure of his first season in the big leagues starts taking a toll.

Jang Jung-suk, manager of the Nexen Heroes, also seems to be moving toward the strong second batter approach, assigning Michael Choice, while the Kia Tigers are struggling to decide how best to approach the position, constantly switching between Roger Bernadina and Kim Joo-chan.