[Sponsored Report] AlcaCruz: 'Super Stream Live' - what is the principle?

[Sponsored Report] AlcaCruz: 'Super Stream Live' - what is the principle? 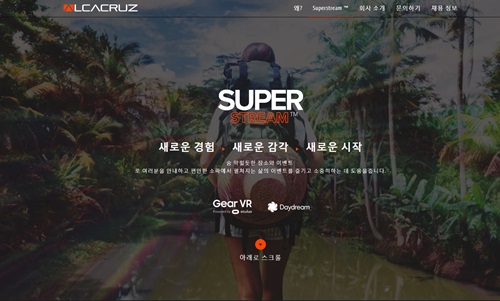 A Silicon Valley IT start-up, AlcaCruz (CEO, Emily Ward), has unveiled their SuperStream Live. This is a new streaming technology that provides a streaming service that enables live video streaming of 360 degrees VR (Virtual Reality).

According to AlcaCruz, the SuperStream Live saves smartphone battery and therefore, its power, data, and server cost up to 75% than the conventional streaming technology for 2D video. This patented technology helps users watch VR 360 video in high-quality without downscaling from the original feed.

“SuperStream Live is expected to deliver real-time live concerts, shows, and events with VR live cameras,” said an officer of AlcaCruz. What is then the difference of the SuperStream Live from the conventional streaming ?

The video encoding and decoding technology have been developed for over 40 years, and it has evolved mature enough to deliver high definition video at the resolutions of 1080p (1920x1080) via CDN system. However, the conventional streaming technology is not suitable for video with ultra-high-resolution required for VR.

The minimum video size to deliver with immersive VR experience is surveyed as 4K, or 4 times the resolution of 1080p. In other words, if a 1080p movie file of a Netflix is about 800MB, the 4K version will be around 3.2GB in size.

When this video is streamed over internet, the minimum average network for a 1080p video should be around 6mbps (6mega bits per second). But then, the average speed of the 4K image should be 13-16mbps.

SuperStream Live can deliver the super-high-definition video at 3mbps as well as 6K video at 6mbps. This data reduction allows 6K VOD and Live technology to be delivered vividly in live, without any problem.

Keith Ha, CTO of AlcaCruz, commented, "SuperStream Live is praised with excitements by many global service companies, for its technical uniqueness and differentiation", also adding, "we look forward to working with companies creating 360° VR video, VR application developers, and particularly who is bullish about the future of VR video with 5G network."

Keith used to work for NVIDIA as a software program manager in autonomous driving System On Chip(Soc). He also worked in AMD and Conexant in the past.

It was known that he invented and developed SuperStream Live with Solomon Lee, Chief Cloud Architect of AlcaCruz, who has worked as cloud architect in Samsung SDS and several other start-ups.