Kang Baek-ho of the KT Wiz had one of the best Korea Baseball Organization debuts in history this season, but now the rookie slugger is struggling to even rack up more than one hit a game. 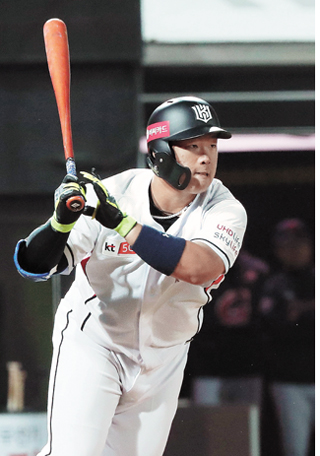 Kang Baek-ho of the KT Wiz during a game against the Lotte Giants at Suwon KT Wiz Park on April 26. [YONHAP]

In his first KBO at-bat, Kang hit a home run off the Kia Tigers’ Hector Noesi, who picked up 20 wins during the 2017 season. Not only was it Kang’s first KBO home run, it was also the first for the entire league for the season.

In Kang’s first seven games, he had a 0.370 batting average, four home runs and 10 RBIs. Kang was able to change his swing form depending on the pitcher he faced, adjusting well to the challenges of the professional league.

As Kang’s hot streak continued, KBO clubs spent much of their time analyzing his playing style, and they seem to have found a way to stop him. Kang’s batting average was above 0.300 until mid-April, but it’s slumped to 0.257 as of Tuesday’s game.

Since his game against the SK Wyverns on April 17, where he had two hits, Kang hasn’t had more than one hit in a game.

In his 10 most recent games, Kang batted 0.188 with four RBIs and five runs scored. During the Wiz’s game against the Kia Tigers on April 29, the Wiz’s manager Kim Jin-wook made a slight change to the team’s lineup, having Kang bat first rather than second.

The change didn’t help much, though, as Kang walked away with no hits in four at-bats.

To lower the pressure on Kang, Kim later assigned him to bat seventh in the lineup as the designated hitter during a game against the Doosan Bears on Tuesday.

“In the beginning of the season, when he was batting well, he had great weight transfer and hit rotation at impact,” said Kim. “Now, his shoulder gets ahead, which is what the batters tend to do when they’re not batting well. But I think it’s more of him getting unlucky than the batting speed.”

Kang walked away from Tuesday’s game against the Bears with no hits in three at-bats. At the top of the ninth inning, Yoon Suk-min replaced Kang in the batting lineup.

Kang drilled a pitch from Josh Lindblom in the top of the fourth inning that almost ended up going over the fence for a home run. Just before the fence, Bears’ right fielder Jung Jin-ho caught the ball. At a smaller stadium, it could have been a home run, but since Jamsil Baseball Stadium is the biggest in the KBO, Kang’s hit wasn’t enough.

“Kang Baek-ho is a player we need to develop,” Kim said. “If our team’s statistics depended on Kang Baek-ho’s statistics, then that means the other players are weak. It would have been nicer if his streak lasted longer, but this is normal. It may be a difficult time for him, but I’m sure he’ll get through it.”