AHN HYE-RI
*The author is an editorial writer of the JoongAng Ilbo. 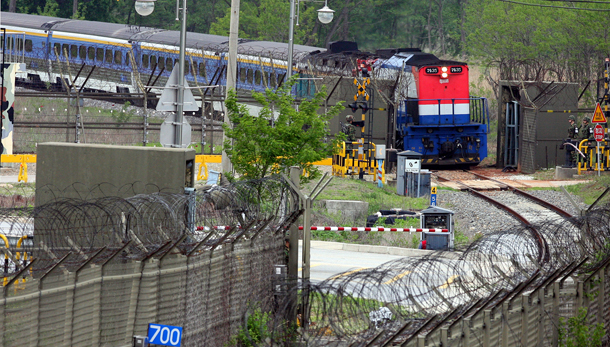 People were excited about the potential business opportunities from inter-Korean economic cooperation and the possibility of reunification. Kim visited Russia the following year and issued the Moscow Declaration with Russia, including a plan to build a railway over the Korean peninsula through Russia to Europe.

Seven years later on Oct. 4, 2007, former President Roh Moo-hyun and Kim Jong-il had a three-day summit in Pyongyang and presented the October 4 Agreement to build an overland logistics network by connecting South and North Korean railways with China and Russia.

Eleven years later on April 27, 2018, President Moon Jae-in and North Korean leader Kim Jong-un had a summit at Panmunjom and discussed connecting the railway. Many people are elated about the possibility of connecting the Seoul-Sinuiju line in the west and the Busan-Wonsan line in the east.

They thought, “Division has made South Korea a virtual island, and now we’ll be able to travel to Europe by rail, not by airplane.”
People went so far as to criticize the Lee Myung-bak and Park Geun-hye administrations for their distrust of North Korea, which Kim called “the lost 11 years.” They seem to think that if it weren’t for rightist administrations, the North Korean leader would have already agreed to connect the railway, bringing tremendous economic gains.

But I don’t think that makes sense. Former North Korean diplomat and defector Thae Yong-ho describes the railway as “something that is fed but cannot be eaten” in the “Password to the Secretary’s Office on the Third Floor,” which is scheduled to soon be published.

Cost is also an issue. Even if North Korea is willing, it is likely that the South will end up footing the bill. Some estimate that it would cost at least 22 trillion won ($20.4 billion) to modernize the railway, and more money would certainly come from South Korea’s pocket.

People can dream all they want. But they need to look at the reality calmly before being enraptured by the fantasy of a cross-continental railway.