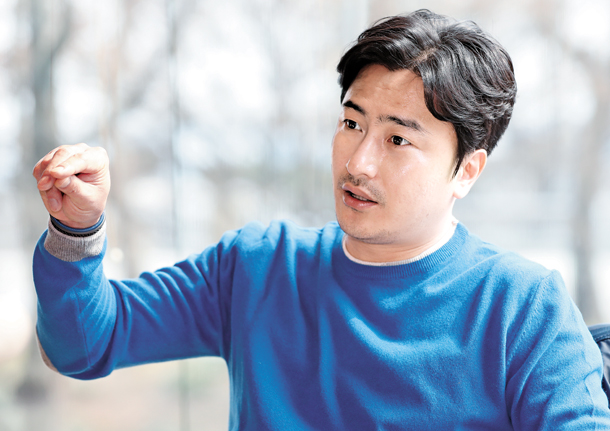 Ahn Jung-hwan, Korea’s all-time leader in World Cup goals, thinks the national football team needs to focus on playing their hearts out to have a chance in the group stage of the upcoming World Cup. 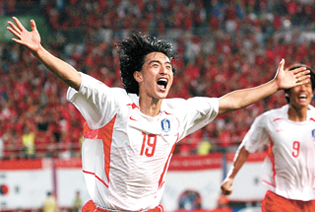 Ahn Jung-hwan celebrates after scoring a goal against Italy during a round of 16 match at the 2002 FIFA World Cup. [YONHAP]

Though many Korean football fans aren’t interested in the World Cup this summer in Russia due to the team’s disappointing results in recent games, Ahn emphasized that it’s important for players to build strong teamwork.

Along with Park Ji-sung, Ahn became a hero of Korean football after scoring a goal against Italy in the round of 16 at the 2002 World Cup.

“When I missed the penalty kick four minutes into the match, I was crying inside,” Ahn said. “At one point, I thought I might have to leave the country if we lost. But once I scored the golden goal, I started crying.”

Ahn may have become a hero in Korean football, but he wasn’t welcome back in Italy, where he had played for the club Perugia. He was released from his team and angry Italian football fans attacked his car. Ahn even said that he received death threats from the mafia.


At the World Cup next month, the Korean national football team, led by head coach Shin Tae-yong, is hoping to repeat Korea’s miracle performance from the 2002 World Cup. However, that will not be easy as Korea is facing tough opponents in Group F: Germany, Sweden and Mexico.

“When I played in the German football league in 2006, the German players were really strong physically,” Ahn said. “But now, they have skills. The national team’s match against Italy in 2002 seemed almost impossible to win. Since it didn’t matter if we lost, we just played as hard as we could. Objectively, we’re behind in strategy, so there is no other way than to play as hard as we can.”

During Ahn’s career, he played against both Sweden and Mexico in friendly matches. He scored a goal in both games, which ended in draws. 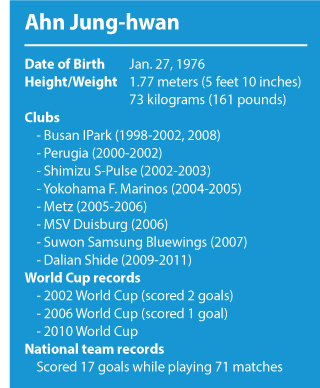 “Swedish players are strong and are physically bigger [than the Korean players],” Ahn said. “Korea’s only chance [to win] is for them to take advantage of their speed.”

While the national team has to focus on speed when playing against Sweden, Ahn said the team should use a different strategy against Mexico.

“Korean football is weak against teams from the Americas that have shown great speed and skills,” Ahn said. “To play against Mexico, Korea will need to pass earlier.”

As Germany is the current World No. 1 and the defending champion, it is likely that Korea, Sweden and Mexico will fight for the second-place spot in the round of 16.

“Though it’s difficult to win against Germany, I think they can at least put up a good fight against Sweden and Mexico,” Ahn said.

Shin and his coaching staff have been trying to figure out a way to use Tottenham Hotspur striker Son Heung-min.

“Heung-min is a striker who was a lot better than I was, and he is close to being a world-class player,” Ahn said. “At Tottenham, the defense spreads out to mark other great players like Harry Kane. But when playing for the national team, the opposing teams’ defense only focuses on Son Heung-min. Rather than making a strategy that centers around Son Heung-min, the team has to use other players on the team wisely so they can spread out the defense.”

Korea seemed to have found a way to score, but has been struggling with its defense. Since August, when Shin took over as head coach, the Korean national football team let in 19 goals in 14 matches, an average of 1.36 goals per match. Over four friendly matches in Europe, Korea gave away 12 goals. Kim Min-jae, the national team’s main defensive player, was injured, and it’s unclear whether he can join the team for the World Cup.

“At this point, they don’t even have time to get used to a foreign defense,” Ahn said. “All 11 players have to move around the field and play the defensive role like the 2002 World Cup. To do so, strong physicality is a must. Teamwork and trust will make the team stronger.”

Though Korea doesn’t have much chance of beating top-ranked teams, Ahn emphasized that the players should never give up.

“I practiced headers a lot because I was bad at them,” Ahn said. “Then, I finally scored on a header at the World Cup. To the players, the World Cup is a dream stage. It may be the most important time of their lives. I want the players to enjoy the World Cup, but also take responsibility for it.”