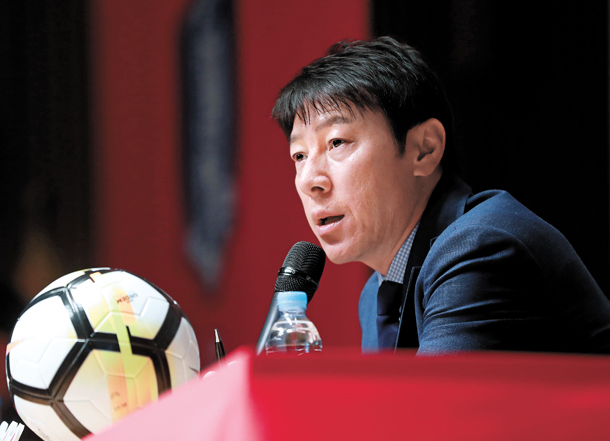 Shin Tae-yong, head coach of the Korean national football team, announces the preliminary roster for the 2018 FIFA World Cup during a press conference at Seoul City Hall on Monday. [YONHAP]

Shin Tae-yong, the head coach of the Korean national football team, announced his revised 28-man roster for the World Cup in Russia at Seoul City Hall on Monday, one month before the tournament kicks off.

To fill in on defense for intended starters Kim Min-jae of Jeonbuk Hyundai Motors and Yeom Ki-hun of the Suwon Samsung Samsung Bluewings, who are not expected to be healthy for the World Cup, Shin selected five more players than the actual entry that will be submitted to the World Cup. Final World Cup rosters are limited to 23 players, so he will have to cut five players before the team heads to Austria on June 3 for its final training session before the World Cup begins on June 14.

Shin planned to only select 23 players, as he believed that teamwork was the most important factor in the team’s success. As the team had many injured players, however, Shin had to come up with ways to minimize the team’s risk, so he selected five additional players.

“Since I’ve been told that it’ll take at least eight to 10 weeks for Kim Min-jae and Yeom Ki-hun to fully recover, they weren’t even considered for my [preliminary] 35-man roster,” Shin said. “I’ve been told that Kim Jin-su has recovered to a level where he can jog, so I’ll wait and see how he does during our training in Korea before announcing the final entry.”

Due to injuries to regular players on the Korean national football team, the changes were inevitable. Shin made some surprising additions to the team, including Moon Seon-min of Incheon United, Oh Ban-suk of Jeju United and Lee Seung-woo of Hellas Verona.

“The most difficult part is defense,” Shin said. “I’ve selected six center-backs, but this doesn’t mean that all six of them will be playing at the World Cup. They’ve been selected for the national team for the first time, and depending on the way they perform during our friendly games in Korea, they may be heading to the World Cup.”

Though Moon is a strong player in the K League, the 25-year-old attacker has never played on the national team. Behind the selection of Moon, Shin said that his decision was made when he watched him play for Incheon. Moon’s experience playing in Sweden for five to six years factored into Shin’s decision, as he seemed to adjust well to the Swedish style of football. Moon’s speed was another factor in his favor.

Oh, too, was a surprising pick from Shin.

“If Kim Min-jae wasn’t injured, it wouldn’t have been easy for Oh Ban-suk to get added to the roster,” Shin said. “When I watched Jeju’s match, Oh showed great man-to-man defense with his tall height but showed weakness in buildup. That’s why he wasn’t added to the national team [before]. But since it’s more important to not allow the opponent any goals for us to win, I chose Oh Ban-suk.”

In addition to Moon and Oh, Lee was an interesting choice.

“Our coaching staff has been consistently monitoring whether Lee Seung-woo was playing in matches for Verona,” said Shin. “Since he played for the U-20 Korean national football team, I was well aware of his strengths and weaknesses. Though he didn’t get a lot of opportunities to play [this season], he’s developed and has shown great playing, and scored his first goal. I selected him for his potential.”

At age 12, Lee caught the attention of FC Barcelona and earned a spot in the club’s junior training program. Lee spent a majority of his young football career with Barcelona, and expressed strong determination to remain there. After the U-20 World Cup, Lee’s contract propelled him to Barcelona’s reserve team when he turned 19, but by then, the team had already filled its non-European player quota. Figuring that the rules would not guarantee him enough playing time, Lee made up his mind to join Hellas Verona in Italy.

Throughout the 2017-18 season, Lee was considered a player with the potential to be the club’s top striker, but he wasn’t given much playing time due to his smaller physique and weakness in defense. Lee didn’t get much playing time, but finished the season strong, scoring his first goal for the senior club during Verona’s match against AC Milan on May 6.

While there were new additions to the roster, Shin didn’t exclude any of the team’s main players in European leagues - Ki Sung-yueng of Swansea City, Son Heung-min of Tottenham Hotspur, Kwon Chang-hoon of Dijon FCO, Koo Ja-cheol of FC Augsburg and Hwang Hee-chan of Red Bull Salzburg.

Ki is expected to be team captain once again.

Korea is assigned to Group F in the World Cup along with Germany, Sweden and Mexico. Korea will start the group stage against Sweden on June 18 and Mexico on June 24 before facing the defending champion, Germany, on June 27.