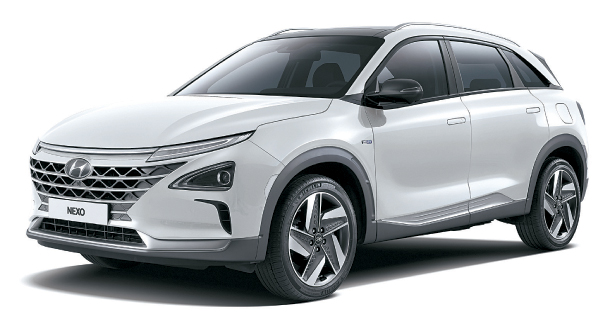 Nexo’s combined mileage is 96.2 kilometers per kilogram of hydrogen when equipped with standard 17-inch tires. It can travel 609 kilometers (378.4 miles) with 6.33 kilograms of hydrogen.

The powertrain is ideal for hydrogen electric cars, and can produce a maximum power output of 113 kilowatts (154 ps) and maximum torque of 395 Newton/meters. The Nexo’s air resistance is minimized with a fully covered underbody, and the design plan includes an air curtain, aerodynamic wheel and auto-flush door handle.

Hyundai Motor conducted a safety certificate test on the hydrogen tank, including impact tests and others that made sure it would not burst. The hydrogen tank’s safety was also examined by crash tests on hydrogen valves, the underbody of the tank and a fire safety test.

In addition, the warranty period for all hydrogen fuel cell components is 10 years and 160,000 kilometers, minimizing customer burdens for parts exclusively for hydrogen vehicles.

The Nexo powers its motor by combining oxygen in the air after sending hydrogen to the fuel cell’s stack, which is a machine that produces electricity and water from a reaction between hydrogen and oxygen.

A fuel cell stack uses only pure air, and therefore the Nexo is equipped with a three-step air purifying system. Outside air goes through the air filter, where over 97 percent of ultrafine particles are filtered. Then, the rest of the particles are absorbed on the surface of the humidifier.

Finally, the air reaches the gas diffusion level in the stack, which is composed of carbon-fiber paper with a microspore structure. Over 99.9 percent of ultrafine particles are filtered, and pure air is released.

When the Nexo is driven for an hour, 26.9 kilograms of air is purified.

This is the amount of air that 42.6 normal adults breathe in an hour. An adult needs 0.63 kilograms of air to breath for an hour.

Hyundai Motor also demonstrated its commitment to fine dust reduction by flying empty balloons and balloons filled with fine dust to clearly show the effect of the Nexo at reducing dust.