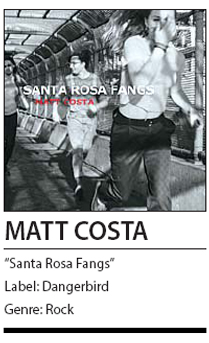 Rock ‘n’ roll is now old enough to draw social security, which means that for contemporary acts, influences have become multigenerational. Such is the case with California singer-songwriter Matt Costa who borrows from those who borrowed on his engaging new album, “Santa Rosa Fangs.’’

“It’s time, time, time playing tricks on my mind,’’ Costa sings as he distills half a century of predecessors into a potent pop pastiche.

It helps that “Santa Rosa Fangs’’ is filled with fetching melodies. There are also hooks galore, from the choir of Costas singing on the piano-pounding title cut to the repetition of the protagonist’s name in “Sharon.’’ Even the tambourines are catchy.

Costa’s off-kilter touches ensure the songs don’t become too sugary. He drops a bar here and there on the aptly named “Time Tricks,’’ and uses a quintuple meter effectively on the dreamy “Real Love.’’

Best is “Ritchie,’’ a Shangri-La-style love tragedy times two and part of an album-long narrative about love, loss, time and distance. The plot’s thinner than Mick Jagger, but the tug of the past comes through with every note. AP