Another day, another man down for Korea’s World Cup team. 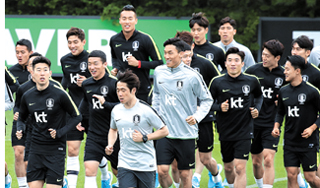 Gangwon FC forward Lee Keun-ho has been ruled out of next month’s FIFA World Cup with a torn medial collateral ligament in his right knee, the Korea Football Association (KFA) said Tuesday. Lee sustained the injury during a K League 1 game against Gyeongnam FC last Saturday.

Though Lee was taken off the field in a stretcher, his K League 1 club initially said the injury wasn’t serious and he’d be able to compete in the World Cup. But further tests revealed more severe damage, and Lee has joined a few others on the national team injury shelf.

It’s the latest injury blow to head coach Shin Tae-yong, who was already without Jeonbuk Hyundai Motors defender Kim Min-jae, who would have been a first-choice center back if not for a stress fracture in his right leg, and Suwon Samsung Bluewings midfielder Yeom Ki-hun, a crafty playmaker who went down with a broken rib. Kim and Yeom weren’t picked for the 28-man provisional roster announced on May 14.

Over the past weekend, Dijon FCO midfielder Kwon Chang-hoon, who made Shin’s 28-man team, suffered a ruptured Achilles tendon in his club’s season finale. He will miss the World Cup and will not be replaced.


Shin also said he will not replace Lee and will go ahead with 26 players.

“Lee Keun-ho had been preparing for this World Cup thinking it’d be his last,” Shin said. “It’s quite disappointing. I was hoping he would be a great leader as the team’s oldest player [at 33].” 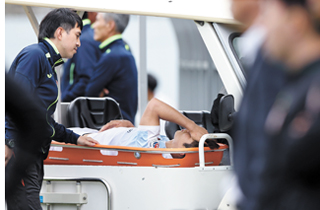 Lee Keun-ho is stretched off the field after suffering a knee injury during Gangwon’s match against Gyeongnam FC on Saturday. [K LEAGUE]

Lee ranked second on the provisional team with 84 caps and tied for second with 19 international goals. Lee scored Korea’s goal in a 1-1 draw against Russia at the 2014 World Cup in Brazil.

Lee was viewed as a strong candidate to play a sidekick to Son, with the two inserted as forwards in a 4-4-2 formation. Whenever he played next to the highly skilled Son, Lee did the dirty work, creating open space for Son by dragging defenders with him and also threatening to score himself.

Shin said he’s going to have to find alternative options from his midfield corps, with Hwang expected to get the starting nod in the forward spot.

“I can use those three players up front, and I have other tactics in place,” the coach said. “Fans don’t have to worry about our situation.”

Of the three, Moon and Lee have never played for the senior national team. Shin said Moon, who spent five seasons in lower-tier Swedish leagues, is an aggressive and speedy player tailor-made for Korea’s opening Group F match against Sweden. Lee, a former FC Barcelona prospect, played for Shin on the under-20 national team, and has a high offensive upside. Koo, captain of the 2014 World Cup team, has 19 goals in 65 international matches but is dealing with a minor knee injury.

Shin admitted that the mood within the team was downcast after Lee left the camp Monday evening, and the ones left standing must step up.

“Now, all the players must compete for the guys that have gone down,” the coach added. “They’re going to have to give 150 percent and then we’ll be able to enter the World Cup on a good note.”