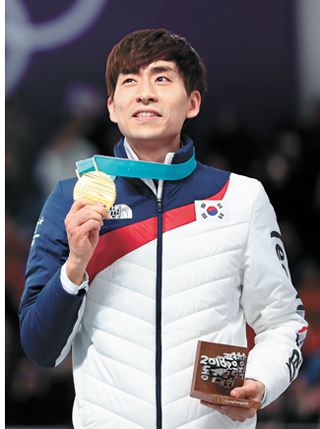 Lee Seung-hoon raises his gold medal after the mass start race during the PyeongChang Olympics in February. [YONHAP]

In announcing the findings of a probe into the Korea Skating Union (KSU) on Wednesday, the Sports Ministry said without revealing names, that a skater is believed to have struck two younger teammates during overseas competitions in 2011, 2013 and 2016. The ministry carried out a month-long special investigation into the KSU starting in March, after a series of scandals involving the skating organization before and during the PyeongChang Olympics in February.

But sources at the KSU later identified the accused athlete as Lee, a two-time Olympic gold medalist.

One player told the ministry that Lee smacked his head hard while they were eating at a restaurant in the Netherlands in 2016. The team was competing at the Speed Skating World Cup at the time. While they were dining, a piece of food that the player was chewing flew near Lee. The player nervously tried to laugh it off and apologized to Lee, who then asked, “Are you laughing?” and allegedly hit the player.

Another player told the ministry that Lee hit his head multiple times during a training session in Germany in 2013.

But according to sources from the ministry, Lee argues that he was just playing around with his teammates and hit them lightly.

Lee, 30, is one of Korea’s most decorated Winter Olympic athletes, having won two gold and three silver medals in four different disciplines across three Olympics. He was believed to have had a great relationship with his peers after the mass start race in PyeongChang, where one of his teammates set the pace for Lee for the majority of the race before falling back to allow Lee to take gold.

He shot to stardom by capturing gold in the men’s 10,000 meters and silver in the 5,000 meters at Vancouver 2010. He added a team pursuit silver at Sochi 2014, and then became the inaugural men’s mass start gold medalist at the PyeongChang Olympics, also earning silver in the team pursuit.