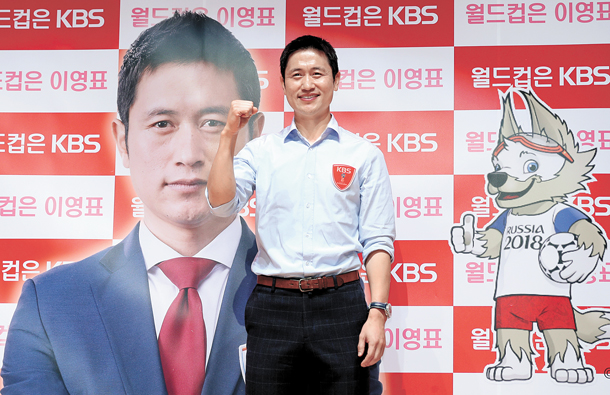 Lee Young-pyo, a former member of the Korean national football team, poses during a news conference at KBS headquarters in Seoul on Thursday. [YONHAP]

They were once teammates who led Korea to the semifinals at the 2002 FIFA World Cup, but now they will have to compete against each other as television commentators at the 2018 World Cup.

Lee Young-pyo, the former Tottenham Hotspur left back who currently works as a football commentator for local broadcaster KBS, more than welcomes the competition.

Lee said on Thursday that he is looking forward to meeting his former national teammates in the broadcast booth at the World Cup in Russia. Former Manchester United midfielder Park Ji-sung will make his debut as a commentator after recently signing a deal with SBS, while Ahn Jung-hwan, former Perugia forward, has been working with MBC since 2014.

“I just like the fact that I can meet with these guys in the booth,” Lee said at a news conference at KBS’ headquarters in Seoul. “When you go to the World Cup, you can see people commentating on matches next to your booth. I am looking forward to talking with them and maybe having some dinner together.”

Lee, who has been commentating for KBS since 2014, is known for his precise predictions and analyses. When asked about the broadcast battle with Park and Ahn, the 41-year-old said that he has never lost in the ratings.

“Ahn is a commentator who doesn’t need further explanation, because he is so well known to the public,” he said. “As for Park, many people think he isn’t well-spoken, but he is actually a funny man, so he’ll entertain lots of fans.”

Lee, who also had stints with PSV Eindhoven and Borussia Dortmund, promised his commentary would deliver every emotion from the stadium. “I think good commentary comes from a good match,” he said. “I hope our players can play a good game so that I can provide good commentary.”

Korea is paired with Sweden, Mexico and Germany in Group F at the World Cup. Lee said Korea’s chance of reaching the knockout stage is less than 25 percent, but that prediction is from his head, not his heart. “My predictions and expectations are different,” he said. “I know our group-stage opponents are stronger than we are, but in my heart, I hope we can advance to the next stage 100 percent.”

“Since Sweden is likely to use their basic 4-4-2 formation, I think we may go with a back three system,” he said. “Against Mexico, I believe a back four system will work for us.”