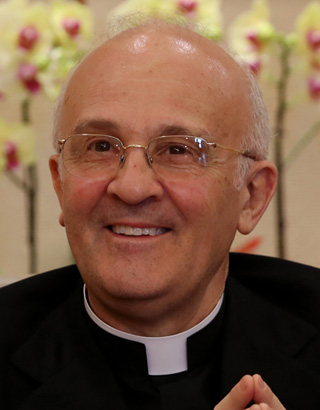 Archbishop Alfred Xuereb, 59, made the remarks upon his arrival in Korea for the Vatican’s diplomatic mission here. In February, the pontiff named Xuereb the new apostolic nuncio for both South Korea and Mongolia.

“He told me, ‘Please assure the Korean people and also the bishops that he will continue praying that future generations will have a future of stability and prosperity,’” Xuereb said in response to a question from Yonhap News Agency.

“The pope is very much informed about the situation, and he has great hope that the talks, which started on April 27, about the reconciliation would continue and will be successful so that the future generations will live in a peaceful environment, prosperous future,” the Maltese prelate added, referring to last month’s inter-Korean summit.

The post has been vacant since Archbishop Osvaldo Padilla retired in September.

The apostolic nuncio expressed an enthusiasm to know more about Korea and mingle with its people.

“I told [the pope] that I accepted [his proposal to serve in Korea] very willingly and also with enthusiasm because I feel a sort of attraction. I feel that the Lord is calling me to come here and try to be … to do some good,” Xuereb said.

“I am here to serve the church, and I will do my best with the help of my secretary to get to know as much as possible about Korea, in order to serve better. The better I know Korea, the better I can serve the Korean church and Korean people,” he also said.

Xuereb’s mission here came amid a flurry of diplomacy aimed at ending Pyongyang’s nuclear ambitions and establishing a lasting peace on the peninsula.

Before coming to Seoul, the archbishop told the Vatican News that the peace process by Seoul and Pyongyang gives “great hope,” though it may be a “long one with many obstacles to overcome.”

Pope Francis has shown keen attention to the growing mood for inter-Korean reconciliation and peace on the peninsula.

Days before the April 27 inter-Korean summit, the pontiff was quoted as saying that the meeting would be an “auspicious opportunity that leads to a journey for reconciliation and the restoration of fraternity.”

Earlier, he said, “We implore fruits of dialogue for the Korean Peninsula that the discussions underway may advance harmony and peace within the region.”

The pontiff visited Seoul in August 2014 for a trip during which he attended a gathering of Asian Catholic youths and met with the socially marginalized, victims of Japan’s wartime sexual slavery and the bereaved relatives of people who died in an April 2014 ferry disaster.

Born in Malta in October 1958, Xuereb was ordained a priest in 1984. He earned a Ph.D. in theology from the Pontifical Theological Faculty Teresianum, an educational institution of the Roman Catholic Church.

In 2007, then-Pope Benedict XVI appointed Xuereb his second private secretary. After Pope Francis was elected in 2013, Xuereb became his first private secretary. From 2014 to his appointment as the apostolic nuncio to Korea and Mongolia, Xuereb served as the first prelate secretary of the Secretariat for the Economy.