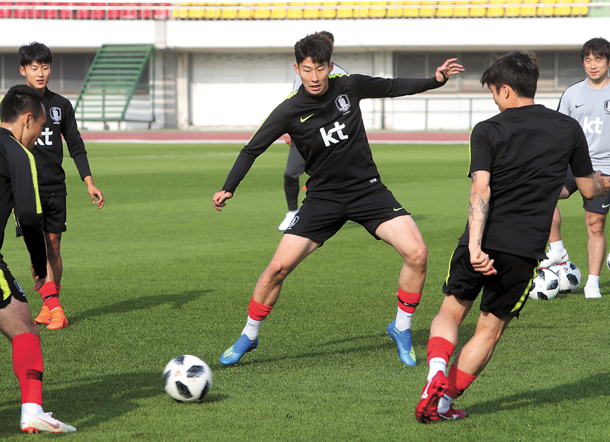 Korea’s World Cup practice matches in Austria will have tight security, a national football team official said Wednesday, following reports that their first group stage opponents are looking to collect information from the match, which will be played behind closed doors.

Korea will play against Senegal at Das.Goldberg Stadium in Grodig, Austria, on June 11 before they fly to their World Cup training camp in Saint Petersburg, Russia, the next day. Korea is in Group F at the 2018 FIFA World Cup in Russia, along with Sweden, Mexico and Germany.

Swedish coaching staff recently told reporters that they will try to get information from Korea’s match against Senegal even though it won’t be open to the public. They added that they thought playing a game in private was unusual and something they would never do ahead of the World Cup.

“I’ve never heard about a closed game before, but I guess it is allowed,” Lasse Jacobsson, a Swedish scout, told local media. “We will still try to get information from that game. How? It’s a secret.”

In response, the Korea Football Association (KFA) emphasized that it will make sure no one from outside the team will be watching Korea’s match against Senegal. It already announced that the stadium will not be open to either Korean media or local fans in Austria.

“No one will be allowed to enter the stadium,” a KFA official said. “We will obviously try to stop our national team information from falling into the hands of our World Cup opponents.”

Korea will open its World Cup campaign with a game against Sweden in Nizhny Novgorod on June 18 before meeting other Group F opponents. Both sides consider their first match critical for their bid to reach the round of 16.

“Ki is starting all the attacks, setting the tempo,” he said. “Son is very skillful, hard to stop, good at covering the ball. He is very important for them [Korea].”?

Sweden will also face Denmark on Saturday at Olympic Stadium in Stockholm and will take on Peru at Ullevi Stadium in Gothenburg on June 9 as part of their own World Cup preparation.

“Peru are pretty similar to Korea,” Jacobsson said. “It will be a good test for us.”

To observe their opponents in those two matches, the KFA already announced that assistant coach Cha Du-ri will make a trip to Sweden this week.

“Cha will not be with the national team’s friendly match against Bosnia and Herzegovina on Friday,” the KFA official said. “He will report to head coach Shin Tae-yong and help us set the game plan for Sweden.”