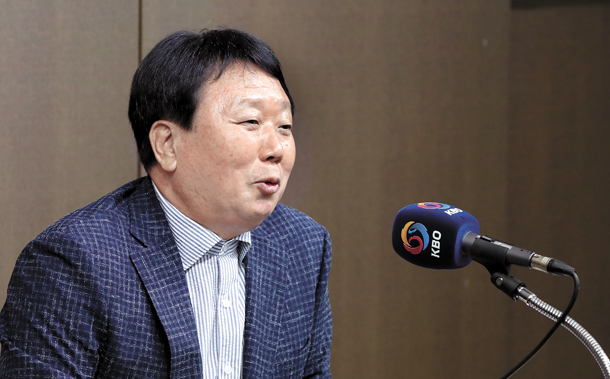 Sun Dong-yol, manager of Korea’s national baseball team, announces his roster for this year’s Asian Games at the headquarters of the Korea Baseball Organization in Seoul on Monday. [YONHAP]

There will be 24 players on the team. Among them, two have garnered the most controversy for alleged draft dodging.

Oh Ji-hwan of the LG Twins and Park Hae-min of the Samsung Lions have exceeded the age limit to substitute their mandatory military service with either time on the Police Baseball Team or Sangmu Phoenix, the military team. Now, winning a gold medal at this year’s Asian Games is the only way for them to avoid actually serving in the military.

To fans, their bid for the national team seemed like an easy way out of conscription. Even so, Sun decided to add both players to the roster.

With 66 games played this season as of Monday, Oh has a batting average of 0.300 with 33 RBIs and 44 runs. He has the second-highest wins above replacement in the Korean league, at 2.03, after Kim Ha-seong of the Nexen Heroes.

Park, too, is having a great season. He has a batting average of 0.305 with four home runs, 30 RBIs and 45 runs in 65 games. Although his batting is not the best in the league, he has been considered one of the best players in stealing bases and defense. Park has been leading the league in stolen bases for the past three seasons and shown a wide range of defense.

“Right now in the Korea Baseball Organization, we don’t believe there are good enough utility players,” Sun said, “so we have decided to select players that are good in one position.”

Of the starting pitchers, Yang Hyeon-jong of the Kia Tigers and Cha Woo-chan of the LG Twins are the only pitchers to have competed before at multiple international events.

Kim Kwang-hyun, a pitcher for the SK Wyverns, was widely considered a likely contender for the roster. He last competed for the national team at the Premier 12 championship in 2015. But ever since returning from an injury this season, the Wyverns’ manager, Trey Hillman, has been strictly limiting Kim’s pitching.

“I talked to Kim Kwang-hyun on the phone,” Sun said, “and he told me he wants to pitch at this game, but since he is a must-have player in bigger events, I hope he takes good care of his body for future events.”

Four of the players - Ham Deok-ju of the Doosan Bears, Im Gi-yeong of the Kia Tigers, Park Min-woo of the NC Dinos and Kim Ha-seong of the Heroes - have previously competed for the team at the Asia Professional Baseball Championship in November 2017. The championship was Sun’s first international event as a manager, and the team comprised young players that were under 24 or had three years or less of professional experience.

Lee Jung-hoo of the Heroes was excluded from the roster. Lee was the Korea Baseball Organization’s Rookie of the Year in 2017 and set a record for most number of hits. He, too, played at the Asia Professional Baseball Championship.

On why he was excluded, Sun said, “The left fielder will be Kim Hyun-soo, and the right fielder will be Son Ah-seop. We had a long discussion about the center fielder, but one of the coaches mentioned that the team didn’t have right-handed batters. Lee Jung-hoo was our candidate but was excluded from the lineup for this reason.”

On the roster, Park Kun-woo of the Bears is the only outfielder that bats right-handed. In addition to the exclusion of young professionals, Sun didn’t add a single amateur player. Since the 2002 Asian Games in Busan, at least one amateur player has been added to the national team at each Asian Games.

“I told Kim Ung-yong [head of the Korea Baseball Association] that we have to win a gold medal at the Asian Games and decided to make a team consisting only of professional players,” Sun said.