An Byeong-hun is the last of four Korean golfers to qualify for the 2018 U.S. Open starting on Thursday at Shinnecock Hills Golf Club in New York. 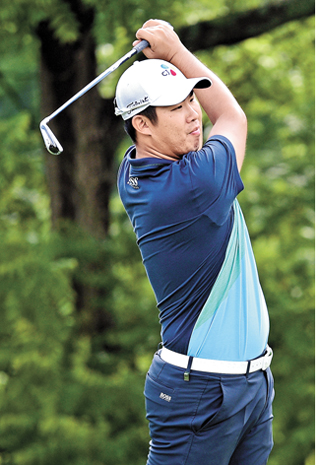 An Byeong-hun watches his shot at The Memorial Tournament on May 31. [AP/YONHAP]

An qualified through exemption category 14, which allows the top 60 point leaders in the official world golf ranking as of June 11 to receive exemptions.

A runner-up finish at The Memorial Tournament presented by Nationwide two weeks ago allowed An to make a big jump in the world ranking, moving up 29 spots to No. 56. However, as An missed the cut at the FedEx St. Jude Classic, it wasn’t certain that An would still be in the top 60 and get the exemption until the final ranking was announced on Monday. Thankfully, An only dropped one spot to No. 57.

With the exemption in the bag, An will now be competing at the U.S. Open for the fourth consecutive year. An’s best finish was last year, where he made the cut for the first time and finished tied for 23rd.

An will tee off on the 10th hole along with Shane Lowry of Ireland and Chez Reavie of the United States at 2:09 p.m. in his first round.

Kim Si-woo was the first Korean golfer to earn an exemption onto the U.S. Open, as his victory at the 2017 Players Championship secured his spot for three years. Kim will tee off on the first hole at 1:58 p.m. along with Haotong Li of China and Kiradech Aphibarnrat of Thailand during his first round.

Aside from Kim and An, who both qualified through exemptions, the other two Korean golfers - Im Sung-jae and Park Sung-joon - successfully earned their spots through the competitive qualifiers, which ended on June 5.

Im shot a two rounds total of nine under par during the sectional qualifying in Ohio on June 5, finishing tied for first along with Lowry. Im, who plays on the Web.com Tour, will be competing at his very first major tournament.

During the first round, Im shot five under par. In the second round he shot four under par to easily earn his spot. Since the majority of the players that competed at The Memorial Tournament played at the Ohio site, it was one of the toughest qualifying contests for this year’s U.S. Open.

Notable players like Vijay Singh of Fiji and Ryan Moore of the United States played in the qualifier but missed the cut.

Im won the Tour’s season opener, The Bahamas Great Exuma Classic at Sandals Emerald Bay in January, becoming the second youngest golfer to ever win on the Web.com Tour at age 19.

Im will tee off on the 10th hole along with Russell Knox of Scotland and Matthew Wallace of England at 8:35 a.m.

Park Sung-joon, who played on the PGA Tour during the 2014-15 season, qualified at the California site by shooting a two round total of six under par, finishing tied for third. Park will be competing at the U.S. Open for the first time.

Park will tee off on the 10th hole along with amateur Shintaro Ban of the United States and Tim Wilkinson of New Zealand at 8:46 a.m.