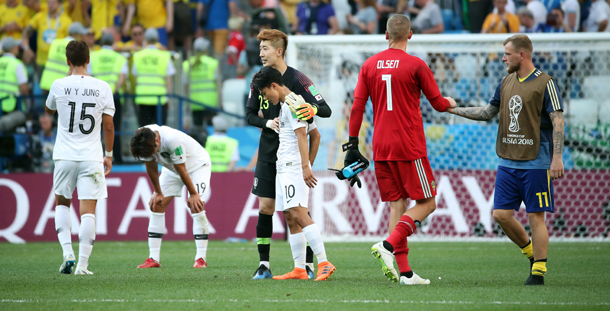 The Korean national football team, in white, reacts after losing to Sweden 1-0 in its first 2018 FIFA World Cup match at Nizhny Novgorod Stadium in Russia on Monday. [YONHAP]

Korea lost 1-0 in its first FIFA World Cup match against Sweden at Nizhny Novgorod Stadium in Russia on Monday.

After a scoreless first half, Sweden's Andreas Granqvist finally scored on a penalty kick. The video assistant referee (VAR) system, introduced for the first time at the World Cup this year, wasn’t used to Korea’s advantage, as Sweden’s penalty was given after the video review.

Head coach Shin Tae-yong made a last-minute effort to square the match by substituting Lee Seung-woo in the 73rd minute, but Korea still wasn’t able to score a goal.

Throughout the match, Korea was far behind Sweden in shots on target, as Korea only had one shot attempt with none on target, while Sweden had eight attempts with two on target.

With a loss, Korea is ranked last with 0 points, along with Germany, in Group F. Korea will play its second group match against Mexico at Rostov Arena in Rostov-on-Don on Saturday.