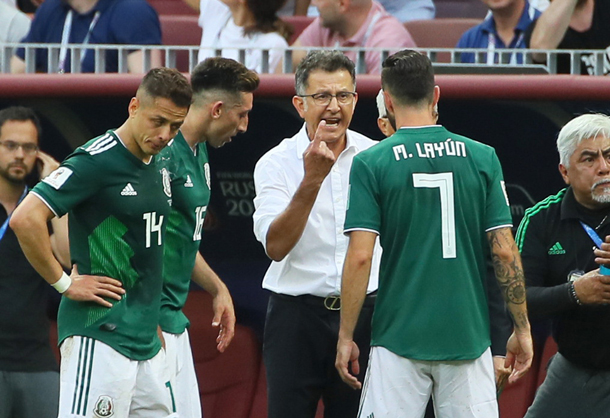 Coach Juan Carlos Osario, in white, gives directions to his players during Mexico’s opening match against Germany at Luzhniki Stadium in Moscow on Monday. [YONAP]

After Korea lost to Sweden 1-0 in their first World Cup match on Monday, the Taeguk Warriors have no choice but to win against Mexico on Saturday if they hope to remain in the tournament.

It’s not going to be easy. The Mexican team is stronger, faster and began this year’s World Cup with an upset win against Germany, the defending champions.

The most common criticism of the Korean team was their lack of strategy, characteristic plays and speed.

“It was very disappointing,” commentator Ahn Jung-hwan said during MBC’s broadcast of Korea versus Sweden. “The most important thing was that we didn’t have any players when making a counterattack.”

After the match, Ahn said the Taeguk Warriors will have to thoroughly prepare for their match against Mexico, whose players are faster and make tighter plays.

“They need to figure out whether they are going to fight offense or defense,” Ahn said. “Korea has to accept that [Mexico] is better than them, and they need to play with a strong mentality. They need to play differently.”

Korea has to win against Mexico in order to advance to the round of 16. But El Tri, ranked 15th in the world, is going to be a tougher opponent than No. 24 Sweden. (Korea is ranked 57th.)

During Mexico’s first match against Germany, the team demonstrated strong agility and defense, scoring one goal against Germany and maintaining their lead throughout the game. After the match, the head coach, Juan Carlos Osorio, said their strategy against Germany took six months.

Park Ji-sung, a former footballer who now commentates for SBS, expects Mexico to come up with another strategy against Korea.

Miguel Layun, midfielder for El Tri, said during a news conference after training on Monday that Osorio has already planned out strategies for the match against Korea.

Osorio made his professional debut in 1982 with Deportivo Pereira. After two seasons, he left to play midfield for Internacional, but his career didn’t last long. In 1987, he retired, succumbing to injuries sustained while playing for Once Caldas.

He later turned to coaching, starting with the Staten Island Vipers, where he was the conditioning coach from 1998 to 1999. After earning a coaching license from the English FA, he moved to Manchester City and served as the club’s conditioning coach from 2001 to 2005. Later, as manager of the New York Red Bulls, Osorio led the team to the 2008 Major League Soccer Cup title and returned home to Colombia to coach Once Caldas and Atletico Nacional.

When Osorio was appointed head coach of El Tri in 2015, he earned the nickname “El Recreacionista” for his recreational training style.

Osorio studied exercise science as an undergraduate at Southern Connecticut State University and developed a reputation for physical training.

Fans were dubious of his unorthodox methods, but Osorio persisted with his coaching philosophy. Even after Mexico’s match against Germany, he allowed his players to cool down by playing casual footvolley.

Mexican fans might be singing Osorio’s praises now, but prior to the World Cup, they had low expectations of him.

In their mind was Mexico’s disappointing 7-0 loss to Chile during the quarterfinals of 2016 Copa America. At the time, Osorio regularly changed the team’s strategy and players.

The coach started turning things around this year, and Mexico finished the American qualification round for the World Cup at the top.

“Fans were worried because Osorio had one too many strategies, but he easily washed away their concerns during Mexico’s opening match against Germany,” said Han Joon-hee, a KBS football commentator. “There’s a high possibility that he’ll bring out a more aggressive strategy against Korea.”

There are reports that Osorio has been sending his coaching staff to watch Korea’s matches and even consulted with former Korea head coach Guus Hiddink, who led the Taeguk Warriors to the semifinals of the 2002 World Cup.

“The tournament is not over yet,” Ahn of MBC said. “If a team loses, that also means that the coach and the country lost, too. So to win, everyone should work together. There’s no guarantee that [Korea] will compete again at the next World Cup four years from now. In football, if you see a 1 percent possibility, you should try.”