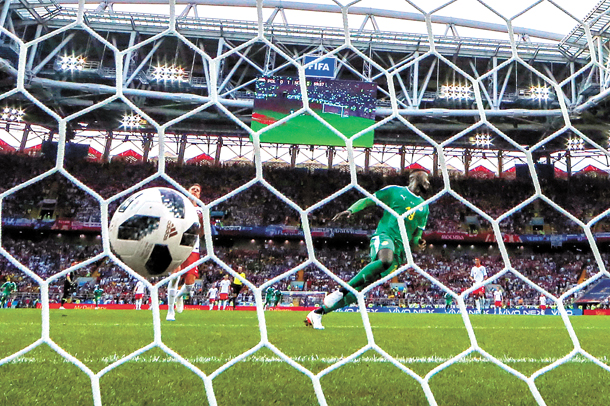 Senegal’s M’baye Niang, in green, scores a goal against Poland during a match at Spartak Stadium in Russia at the 2018 FIFA World Cup. [XINHUA/YONHAP]

While the 2018 FIFA World Cup in Russia isn’t all about the money, this year, the amount of cash up for grabs is higher than it’s ever been before.

The Russia World Cup will award $400 million in prize money to the 32 participating countries at this year’s World Cup based on their performance in the tournament, according to the statistics website Statista. Players’ clubs will be compensated for time lost and other costs with an additional $392 million fund.

Even the second-place team will be awarded $28 million, $3 million more than 2014. The third and fourth-ranked teams will each receive $24 million and $22 million, while the quarterfinalists will receive $16 million, $2 million higher than 2014. However, teams that fail to advance out of the group stage will receive $8 million, the same as 2014.

FIFA was able to increase the prize payouts as its expected revenue from this year’s World Cup is expected to increase by 25 percent, or about $6 billion, from 2014. FIFA expects $3 billion of this will come from television broadcasts. The football organization expects a total of 3.2 billion fans to watch the Russia World Cup.

During the 2014 World Cup, FIFA had revenue of $4.8 billion. About $2.143 billion came from television broadcasts, $1.6 billion from sponsors and $527 million from ticket sales.

Aside from the compensation the players receive from FIFA, they are expected to receive even more money if they take home a victory as their country’s football association will reward them with a bonus.

Prior to the World Cup, England’s football association announced that it will give a 5 million pound ($6.57 million) bonus to the team if England wins its second World Cup title.

The German Football Association said they will give a bonus worth about $9 million to their players if they defend their World Cup title.

The Brazilian Football Confederation also said that they’ll pay a bonus to their team if they win a sixth World Cup.

During the 2010 World Cup, each player on the Korean national football team received 170 million won ($152,700) for advancing to the round of 16. If Korea had advanced to the quarterfinals, that prize would have jumped to 270 million won.

Clubs with players in the World Cup are also compensated by FIFA for regular season matches that they miss due to national team games.

The K League 1 club Jeonbuk Hyundai Motors has sent the most players to the Korean national team’s World Cup side, with three - Kim Shin-wook, Lee Jae-sung and Lee Yong.

However, since Lee transferred to Jeonbuk in January, his club will only receive 75 percent of the $230,000. The club will receive a total of $640,000 after the tournament.