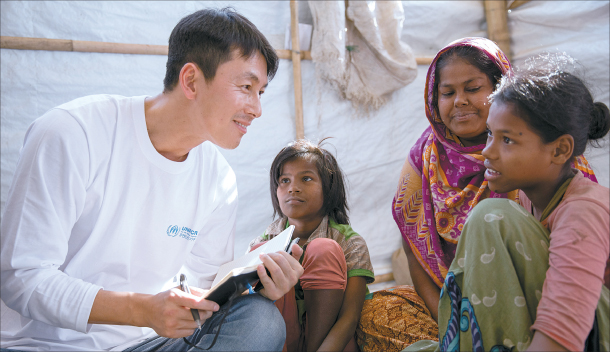 Jung Woo-sung, an A-list Korean actor and the UNHCR Korea’s goodwill ambassador, will speak about his experience meeting refugees in Bangladesh, Iraq, Lebanon, Nepal and South Sudan at the Jeju Forum.

“What is desperate about the situation of people at refugee camps is not only do they lack access to necessities like food, water, education and health care, there is also nothing definite about their future,” Jung said in an interview with Cosmopolitan Korea for its July issue, “and it is worse for parents who see the same fate for their kids at these camps.”

Since April 1994, when Korea first began accepting refugees, 32,733 people have applied for asylum in the country as of 2017, according to the Justice Ministry, but only 800 have been accepted, a 2.4 percent rate. The figure is less than a tenth of the average world refugee recognition rate, which stood at 38 percent in 2009, according to the UNHCR.

Now, Korea is grappling with a surge in Yemeni asylum seekers on Jeju Island. More than 500 Yemeni migrants fleeing civil war at home arrived on the resort island this year, taking advantage of a visa-free program adopted by Jeju to promote tourism.

On June 1, the Justice Ministry added Yemen to a list of countries whose citizens need a visa to enter Jeju, hoping to stem the tide of asylum seekers to the island. Most Yemenis arrive via direct flights from Malaysia, which allows them to stay up to 90 days visa-free but is not a signatory to the UN Refugee Convention.

Jung emphasized that refugees and displaced people are humans, too.

“They’re called refugees or asylum seekers, but they have personal lives, just like we do,” he said. “The kids I met at the camps, they all had dreams. They said they want to go back home and be a teacher, nurse, soldier, reporter and more, and to help others in their homelands. I hope to shed light on some of this when I speak at the forum.”