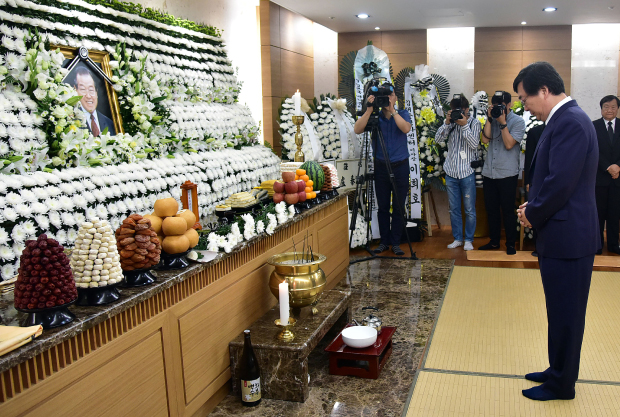 Politicians across party lines, friends and aides paid respects to Kim Jong-pil, a two-time prime minister who died at the age of 92 on Saturday, at his wake at Asan Medical Center in southern Seoul on Sunday. Pictured is Kim Hong-eop, a former lawmaker and son of late President Kim Dae-jung, under whom Kim Jong-pil served as prime minister. Kim Jong-pil had brokered an alliance that allowed Kim Dae-jung to become president in 1998. [YONHAP]

Politicians from all ideological sides visited the mourning altar of Kim Jong-pil, a former prime minister and influential political figure, at Asan Medical Center in southern Seoul on Sunday.

Kim died at 8:15 a.m. on Saturday in his home in Sindang-dong, central Seoul, his aide said. He was 92. The cause of death was old age.

Kim was the prime minister of South Korea in 1971 under the Park Chung Hee administration and again in 1998 during the Kim Dae-jung administration. He was instrumental in helping Kim Dae-jung and Kim Young-sam clinch the presidency and was admired for his wide influence in the political arena, though he himself never reached the pinnacle of power.

“Kim will be long remembered as the politician who bestowed hope on the people of the country,” Ban Ki-moon, former secretary general of the United Nations, said during his visit to the altar on Sunday. “He had the wisdom to see into the future during politically and economically difficult times in the country. I myself have received much advice from him when I was in public service. I am sorry that he did not get to see the two Koreas peacefully unite before he passed.”

“Kim understood that party politics was not a conflict of ideologies or philosophies,” said Lee Wan-koo, a former prime minister, “but about one party complementing another.”

“We cannot explain the modern political history of South Korea without Kim,” said Lee Hoi-chang, another former prime minister who unsuccessfully ran for president in 2007 under the conservative party.

Other visitors to the altar on Sunday included Rep. Park Jie-won of the Party for Democracy and Peace, who was the minister of culture under President Kim Dae-jung when Kim Jong-pil was prime minister; Park Kwan-yong, former National Assembly speaker; Chung Un-chan, another former prime minister; and the sons of Presidents Kim Young-sam and Kim Dae-jung.

On Saturday, the current prime minister, Lee Nak-yon; the chairwoman of the ruling Democratic Party, Choo Mi-ae; and the acting chairman of the main opposition Liberty Korea Party, Kim Sung-tae, paid visits, a testament to the bipartisan influence that Kim had on the country’s political landscape. 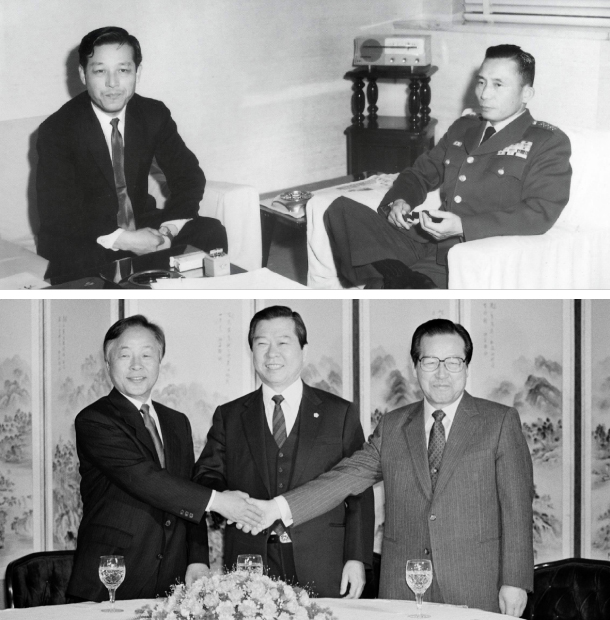 Top: Kim Jong-pil, left, with Park Chung Hee in 1962, when Kim was head of the Korean Central Intelligence Agency, the predecessor of the National Intelligence Service, and when Park was lieutenant general before he became president the following year. In the photo, Kim had just returned from a trip to Japan to normalize diplomatic ties. Bottom: From left, Kim Young-sam, then head of the Unification Democratic Party; Kim Dae-jung, head of the Party for Peace and Democracy; and Kim Jong-pil, head of the Democratic Republican Party, in 1989. Together, they are remembered as the “three Kims of Korea” for their outsize role in the country’s modern political history. [YONHAP]

“The mark he left behind on the modern history of Korea will not be forgotten,” Yoon Young-chan, President Moon Jae-in’s senior press secretary, said on Saturday. “He knew how to smile upon some of the tough and brutal times of Korean politics. We will miss him.”

Moon had a wreath delivered to the mourning altar at the hospital but did not visit immediately after returning from his trip to Russia on Sunday. Prime Minister Lee had said on Saturday that Moon would “likely visit.”

Kim’s death also drew reactions from leaders outside the country.

“Kim was in charge of the negotiations between Korea and Japan to normalize relations,” Japanese Prime Minister Shinzo Abe said in a message to Moon on Saturday, according to Kyodo News. “We are in deep sorrow. The government and people of Japan are mourning for him.”

Kim was the point person for normalizing diplomatic ties with Japan in return for compensation for its 36-year colonial rule of the peninsula in 1964, which sparked a wave of protests nationwide. The financial aid and loans from Tokyo laid the groundwork for Korea’s industrialization under Park Chung Hee.

Kim’s remains will be placed at a cemetery in Buyeo County, South Chungcheong, on Wednesday, next to his wife’s remains. Kim’s wife, Park Young-ok, died of cancer in 2015. She was 86.

Kim was born in Buyeo County in 1926 and was the architect of the military coup that led to Park Chung Hee’s rise. It overthrew a civilian government set up a year earlier after a student-led revolt toppled the government of Syngman Rhee, South Korea’s first president. Park said he carried out the coup in the name of bringing an end to its ineffectiveness and corruption and getting rid of communist elements in a country still reeling from the 1950-53 Korean War.

In 1969, eight years after the coup, Park tried to amend the Constitution to allow him to run for a third term.

Kim opposed the idea, but Park nonetheless rammed through what is now known as the Yushin Constitution in 1972. The revision allowed him to assume dictatorial powers. Kim served as Park’s prime minister from 1971 to 1975.

After Park’s death in 1979, Kim vanished from the political scene when another military strongman, Chun Doo Hwan, took over the country. He came back to the scene with the restoration of direct presidential elections in 1987.

Kim is also well remembered for merging parties and forging alliances. In 1990, during the Roh Tae-woo administration, Kim merged his party with the ruling Democratic Justice Party and a conservative party led by Kim Young-sam. The three-party merger later helped Kim Young-sam clinch the presidency in 1992.

Kim Jong-pil ran for the presidency himself in 1997 but during the campaign decided to ally with Kim Dae-jung, making the famous DJP alliance taken after the initials of their names, which helped Kim Dae-jung win the presidency.

Kim Jong-pil was prime minister from 1998 to 2000 during the Kim Dae-jung administration and retired from public life after an unsuccessful run in the 2004 general election.

Together, Kim Jong-pil, Kim Young-sam and Kim Dae-jung were known as the “three Kims of Korea” for their outsize role in the country’s modern political history.

“Kim was an elder of the country who played a huge role in between changing administrations of Korea,” the Democratic Party’s Choo told reporters at the hospital Saturday.

“In times such as these when the conservative party is meeting its downfall, Kim would have told different party leaders to overcome their differences and work together for a greater goal together,” said Yoo Seong-min, former co-chair of the opposition Bareunmirae Party.

The Moon administration plans to award Kim with the highest civilian merit, the Mugunghwa Medal.

“The Grand Order of Mugunghwa is awarded only to the president or former presidents, so we are hoping to award Kim with the Mugunghwa Medal,” Kim Boo-kyum, minister of the interior and safety, told reporters at the hospital on Sunday.

“We will be honoring Kim for his public service and his accomplishments at the center of Korean history,” Prime Minister Lee told reporters Saturday.