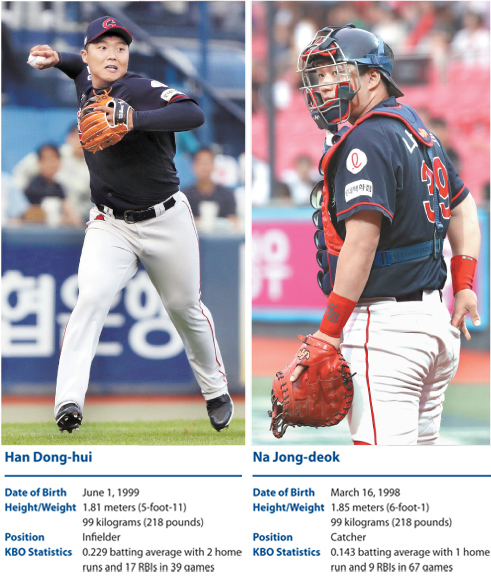 The Lotte Giants may not be playing as well as they hoped, but they are making great strides in training their rookies, especially catcher Na Jong-deok and infielder Han Dong-hui.

The Giants are not known for developing rookie players; 1992 was the last season that a player from the club won Rookie of the Year. But when last season concluded, the Giants failed to retain their veteran catcher Kang Min-ho and infielder Hwang Jae-gyun. The loss was big. The two players had the ability to make two-digit home runs each season.

Rather than bringing a player from the Giants’ minor-league team, manager Cho Won-woo made the surprise decision to give rookies a chance. Na was named the starting catcher and tried to get out of Kang’s shadow.

“Rather than telling myself to be the next Kang Min-ho, I told myself to concentrate on what I’m good at,” Na said.

In the beginning of the season, Na was shaky in his catches and blocks, which led Cho to rotate the starting role among Na, Kim Sa-hoon and Ra Won-tak. Since the Giants had a lot of forkballers, it wasn’t easy for a rookie to play a full game. But once he started playing more innings, he has gotten a lot more stable.

But once his defense improved, Na’s batting became a problem. In the 67 games that Na has played as of Sunday, he has a batting average of .143 with one home run and nine RBIs. Na’s batting average is so bad that he might have been sent down to the Futures League if he played for other teams, but Cho said, “We have low expectations in batting. It’s good enough for him to play well in defense.”

Fans are on the same page. They’ve been encouraging him more than criticizing him, and despite the low average he still holds, it’s a remarkable improvement from when he first started. During the Giants’ game against the LG Twins on May 31, Na hit his first home run in the Korea Baseball Organization.

“He made hits by trying to hit off breaking balls,” Cho said of Na when he first started. “Rather than adding meaning to his first home run, it’s good to see that he is getting better against fastballs.”

In the KBO, a lot of the players find it difficult to hit home runs against fastballs. Giants infielder Shin Bon-ki, for example, improved his batting this season after focusing solely on fastballs during the offseason.

For infielder, the Giants struggled to find a replacement for Hwang. Cho rotated four players in the position, but none of them showed the ability to play the position fully. The manager finally made the surprise decision to assign Han to the position, adding him to the starting roster after the preseason exhibition games.

Out of the Giants’ rookies this season, Han is the only one to have participated in spring training. When he was added to the list, Cho said, “I received reports that he was in a condition to go through KBO training, so I wanted to see it myself.”

Since there wasn’t a player that stood out to play third base, the Giants decided to give Han the responsibility.

But like Na, Han wasn’t able to respond to the high expectations right away. While he showed tough defense, he lacked basic skills and had trouble adjusting to faster hits. Han also struggled in batting, with an average of .222 in his first 26 games. As a result, the Giants sent Han to the Futures League on May 2, before the Giants’ game against the Kia Tigers.

“I needed that time,” Han said.

Rather than feeling discouraged, Han focused on improving his weaknesses. In 17 Futures League games, Han had a batting average of .455 with seven home runs and gained confidence in his defense.

When he finally returned to the Korean majors, Han met expectations. Since May 27, Han has played 12 straight error-free games, and his slugging average went up significantly, from .274 to .512.

During the Giants’ game against the Hanwha Eagles on June 1, Han hit his first career home run in the KBO, and four games after that, he hit another. This time, it was a grand slam. Han became the 25th rookie in KBO history to hit a grand slam.

Despite the big improvement, Cho sent Han down to the Futures League again after the game against the Samsung Lions on June 12. The manager hopes Han will become more consistent by playing more games in the minors. In 39 KBO games that Han has played in, he has a batting average of .229 with two home runs and 17 RBIs.

“He should be our starting player in the near future,” Cho said.

In the six most recent Futures League games, Han has a batting average of .478.