Korea needs a miracle to hold off Germany

Korea needs a miracle to hold off Germany

Korea will strive for a miracle in their final group stage match at the 2018 FIFA World Cup when they face defending champions Germany tonight. 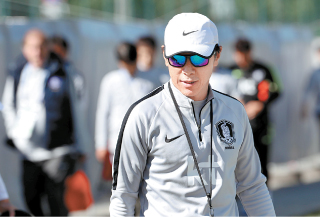 Korea will close out their group stage campaign with Germany at Kazan Arena in Russia, today. In a clear David versus Goliath match, Korea will try to upset Germany and hopefully earn a ticket to the round of 16.

So far, none of the teams in Group F have sealed a knockout stage berth. From group leaders Mexico to last-place Korea, knockout stage spots are open to all four teams.

Mexico is currently leading the group with two wins, scoring three goals and conceding one. Germany and Sweden have one win and one loss apiece, and both have netted two goals and surrendered two. Korea is last in the group with two losses after bagging one goal and allowing three.

If Korea beats Germany and Mexico defeats Sweden, then three teams will be all square at one win and two losses, and they will have to check tiebreakers to take second place behind Mexico.

One hopeful scenario for Korea is to collect a win with a two-goal margin against Germany and have Sweden lose to Mexico. In this case, Korea would finish ahead of Germany thanks to a better goal difference.

Chances are slim, though, considering that history and figures all point to the Germans as clear favorites. After all, Germany is the No. 1 team in the FIFA rankings, while Korea sits at No. 57.

The four-time World Cup champion is also in need of a victory to reach the round of 16, meaning Korea has to face a fully-committed German side.

In their three previous meetings, Korea collected one win and two losses. Korea stunned Germany in 2004 when they collected a 3-1 win in a friendly match in Seoul. The other two encounters were at the World Cup, with Korea losing 3-2 in a group stage match in 1994 and suffering a 1-0 defeat in the semifinal match in 2002.

Korea will rely on the attacking prowess of Son Heung-min, who notched the team’s first goal in the tournament against Mexico on Saturday. Son is one of the players who is familiar with the Germans after having stints with German Bundesliga clubs Bayer Leverkusen and Hamburg before signing with Tottenham Hotspur in the English Premier League.

Korea is likely to stick to their familiar 4-4-2 and try to bank on their counterattacks using quick attackers like Son and Hwang Hee-chan.

The question, however, will be whether Korea can feed attackers with accurate passes and make quick transitions from defense to offense.

Korea will likely miss their team captain Ki Sung-yueng after he sustained a left calf injury during the match against Mexico. Ki’s absence means Korea will have to form a new combination in the center midfield.

One possibility is starting Koo Ja-cheol, who is also familiar with German football after playing for clubs like FC Augsburg, Mainz and Wolfsburg. Jung Woo-young and Ju Se-jong are also central midfielders who can feature in the match.

Korea should have learned they should be more careful when defending in the box, as they gave up opening goals to Sweden and Mexico on penalty kicks.