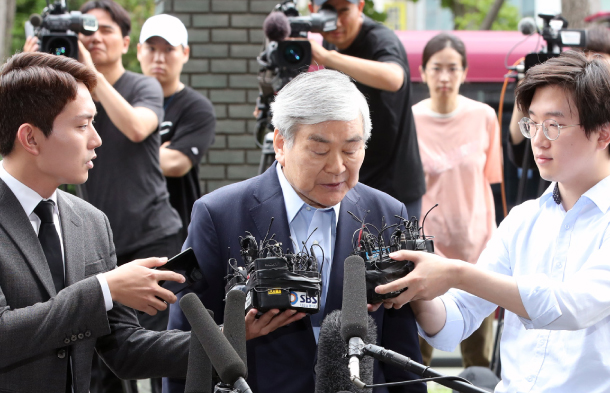 Cho Yang-ho, the chairman of Korean Air, appeared before prosecutors on Thursday for questioning over allegations of tax evasion, breach of trust and embezzlement.

Cho, 69, arrived at the Seoul Southern District Prosecutors’ Office in Yangcheon District, western Seoul, at around 9:30 a.m. “I am sorry,” he told reporters outside the building. “I will faithfully face the investigation.”

When reporters asked why he didn’t pay his inheritance taxes, Cho replied, “I’ll tell everything to the prosecution.” On whether he would admit to the charges on embezzlement and breach of trust, he said he was sorry. Cho did not respond to questions on whether he would step down from his post as chairman.

The Seoul Regional Tax Office determined earlier that Cho and his sister did not report an inheritance of their father’s overseas assets and filed a complaint against the family to the prosecution. They reportedly evaded over 50 billion won ($44.5 million) in inheritance taxes.

Prosecutors will also look into allegations that Cho unfairly awarded contracts to companies run by his own family members and embezzled over 20 billion won in corporate funds.

Some of the money was allegedly used to pay for a daughter’s lawsuit.