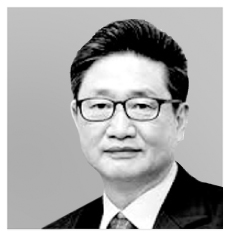 Park Bo-gyoon
*The author is a senior columnist at the JoongAng Ilbo.

At the end of a short walk through a secluded forest, a family graveyard can be found in Eosan-myeon, Buyeo County, in South Chungcheong. Former Prime Minister Kim Jong-pil visited the graveyard in the summer of 2014. I accompanied him. Perhaps knowing where he would be buried made him feel pleased. As I was surveying the landscape, he told me, “It is not the most propitious site for a grave. It is just a place to rest peacefully.”

A tombstone was already erected there bearing 121 letters. It compactly summarized his fiercely led life. As I complimented him on the tombstone, he smiled. Four years later, on June 27 of this year, his body was buried there.

During our visit, Kim stood in front of the tombstone. He wrote that he used the Mencian phrase that “the people will not have a fixed heart if they have no certain livelihood” as the basis of governance. “Mencius is a classic and its profound and mysterious lesson is everlasting. It is an insight about society that political advancement is possible only after resolving the economic challenge of making ends meet,” Kim said.

Maintaining a livelihood and having a fixed heart are contrasting terms and an order Kim had grasped. For a country’s development, what should come first? Is it industrialization or democratization? He seemed proud. “After accomplishing industrialization first, democratization followed and today’s Korea was built,” he said. A controversy still lingers about the military coup on May 16, 1961, which Kim rejected. “So what if it is called a coup or a revolution? May 16 changed the essence and basis of the world. That’s a revolution.”

Kim had turned the world around. A new order emerged through his language. “I ignited the spirit of challenge to the Korean people,” he said. He also mentioned the aesthetics of politics. “A revolution and the arts share something: sentimentality. Only with such a feeling can you imagine the unimaginable and risk your life,” he said.

His language was refined, and he sometimes made piercing remarks. “A politician must win the hearts of the people with the dignity and charm of language,” he said. In the June 13 local elections, conservative politicians were crushed. It reflected the failure of Hong Joon-pyo, the head of the main opposition party, to manage his language. Kim, who was the father of the conservatives, was an elegant firebrand.

Around the time, his health was deteriorating. It was unclear if he knew of the crushing defeat of the conservatives. Ten days later, he passed away. But he predicted a crisis for the conservatives. At the beginning of this year, he said, “Conservative politicians lack a sense of history. It is no surprise that they are falling behind in the debate on modern history.”

He remembered the idea of self-defense in his time. “In the 1970s, Korea and the United States were in conflict. The withdrawal of the U.S. Forces Korea and Korea’s nuclear development were key topics in the controversy. President Park Chung Hee threatened the United States that they should leave if they want, while using the crisis as an opportunity. He managed to succeed in the development of heavy, chemical industries,” Kim said. He described how a superpower uses its diplomacy against others. “The United States ignored weak countries such as Vietnam and withdrew its troops,” he said. “But it stayed in Korea, which was helping itself.”

The Korean Peninsula has changed rapidly. The Panmunjom summits and the North-U.S. summit produced choppy seas. The conservatives failed to ride the historical current and they rejected the current situation. They are just relying on the United States. They oppose Korea’s takeover of wartime operational control. But the United States has changed. The conservatives in Korea are now being criticized as being a Cold War-era reactionary force.

The starting point of restructuring conservatism is the security issue. It is the sense of ownership of self-defense. “Conservative politicians must lead initiatives to cultivate the soil of a spirit of self-defense,” Kim said. It seemed like his political will to the conservatives.
He remembered Charles de Gaulle. In his memory, France is remembered with de Gaulle’s boldness, France’s self-defense and nuclear development. In 1963, he visited France when he was sent into exile by Park. He went to hear de Gaulle speak. “President de Gaulle said, ‘We have Napoleon. We have Joan of Arc. We have Victor Hugo.’ His stubborn patriotism made my heart beat fast,” Kim recalled.

Stubborn patriotism is courage of leadership. “I led the effort to normalize diplomatic relations with Japan with a determination to be labeled as a traitor,” he said. His political life had both light and shadow. He had great success, while criticisms were strong. “Of the various kinds of courage of a leader that Winston Churchill talked about, one is the courage to be hated by others,” he said.

He was a good political observer, and his last subject was Ban Ki-moon, former UN secretary general. Ban returned to Korea in January 2017, and his aides created a busy schedule for him. Ten days later, Kim said, “I don’t understand why his aides are making him run around so busily. A leader needs a mysterious charisma, but the aides easily forget this.” Kim broadened the horizon of conservative politics. “An idealist is a realist, and a realist is an idealist,” he said.