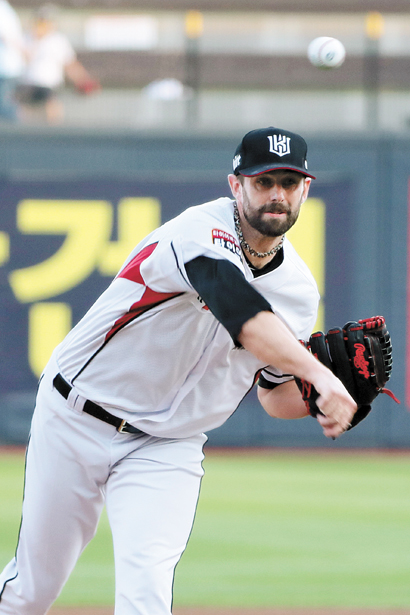 Dustin Nippert of the KT Wiz pitches against the NC Dinos on Friday. [YONHAP]

Dustin Nippert of the KT Wiz became the first foreign pitcher to achieve 100 career KBO wins during a game against the NC Dinos in Suwon on Friday.

Despite his start date being postponed by two days due to rain on June 26 and 27, Nippert was given another shot at his 100th win on Friday. Nippert got off to a shaky start, giving up two runs at the top of first inning, but with the help of the batters, the Wiz took the lead with three runs at the bottom of the first inning.

That was only the beginning, as the Wiz added four more runs throughout the game to win 7-3 against the Dinos. During the game, Nippert gave up five hits and two runs while striking out five batters in seven innings. With his five strikeouts, Nippert achieved another record, becoming the first foreign pitcher in the KBO to exceed 1,000 career strikeouts.

After the game, Nippert thanked his teammates.

In his two previous games, Nippert pitched well but failed to pick up his 100th win. During the Wiz’s game against the Lotte Giants on June 21, Nippert threw 124 pitches over the seven innings and only gave up two runs, but still wasn’t able to pick up a win, as the Wiz failed to score.

Nippert joined the KBO in 2011 after signing with the Doosan Bears. He made a direct impact on the team’s fortunes, picking up 15 wins in his first season in the KBO.

Nippert picked up double-digit wins each season, with the exception of 2015.

After the disappointing 2015 season, he showed dominant form on the mound again as he entered his sixth season with the Bears.

Throughout the 2016 season, pitching in 167 and two-third innings, the American pitcher had 22 wins, more than any other pitcher in the league, and only lost three games.

This was the most wins he earned since he joined the league in 2011.

His winning percentage (WPCT) stood at an astonishing .880, the best in the top of the league, and his earned run average was the lowest of all KBO pitchers at 2.95.

However, in 2017, Nippert once again struggled due to an injury and ultimately finished the season with a 4.06 ERA, picking up 14 wins and eight losses.

The Bears parted ways with Nippert over his disappointing season, history of injuries and his age, as he is his mid-30s. Over his six seasons with the Bears, Nippert picked up 94 wins.

Nippert signed a one-year contract with the Wiz at $1 million. Since joining the Wiz, Nippert hasn’t started in a game against his former team, the Bears.