The Hanwha Eagles released their struggling pitcher Jason Wheeler and replaced him with David Hale on Friday. 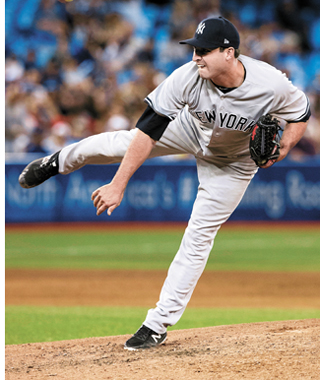 Wheeler had a very inconsistent season, and he concludes his KBO career with a 5.13 ERA and three wins and nine losses.

In Wheeler’s most recent game against the Nexen Heroes on July 12, he seemed to be hitting his stride, as he gave up only one run in five innings in his third win of the season. Despite this, the Eagles decided to part ways with Wheeler.

The 27-year-old lefthander signed with Hanwha for $575,000 after the 2017 season with high hopes. Wheeler joined the KBO after a short major league career with the Minnesota Twins, pitching three innings in two games with a 9.00 ERA. In the minor leagues, he had a 3.74 ERA in 56 games.

The Eagles’ other foreign pitcher, Keyvius Sampson, added great depth to the team’s starting rotation, but Wheeler never managed to break through.

With the addition of Hale, the Eagles hope to continue their strong performance in the second half of the season to give them their first postseason appearance in 11 years. The Eagles finished the first half of the KBO season in second place, with 52 wins and 37 losses, two games behind the first-place Doosan Bears.

The team hopes the addition of Hale will change this. Hale has great control over his change-ups, curves and sliders, and can throw fastballs in the 140-kilometer (87-mile) per hour range.

Hale was drafted by the Atlanta Braves in 2009 and made his major league debut in 2013. During the 2014 season, Hale appeared as the Braves’ starter and a middle relief pitcher, and played for 87 and one-third innings. Hale finished with four wins, five losses and four holds with a 3.30 ERA.

Hale joined the Colorado Rockies in 2015. He picked up five wins and five losses with a 6.09 ERA. Since the 2015 season, Hale had been playing in the minors leagues for affiliates of the New York Yankees and Minnesota Twins.

Despite signing a minor league deal, Hale played in four major league games for the Yankees this season as a relief pitcher, where he recorded a 4.61 ERA in 13 and two third innings.

The Eagles expect that the addition of Hale will strengthen the starting rotation.

He will officially join the Eagles roster on Saturday, July 21.