The power of quiet, fragile sensitivity on stage: Unlike most musicals, the stars of ‘Bungee Jumping on Their Own’ express themselves with restraint

The power of quiet, fragile sensitivity on stage: Unlike most musicals, the stars of ‘Bungee Jumping on Their Own’ express themselves with restraint 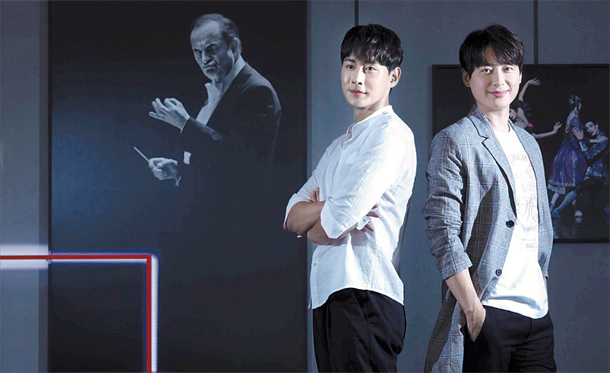 Actor Choi Woo-hyuk, left, and singer and actor Lee Ji-hoon, right, play the main characters in the musical “Bungee Jumping on Their Own.” [KIM GYOUNG-BIN]

Based on the 2001 film of the same name, the musical “Bungee Jumping on Their Own” tells a dramatic love story that is presented delicately and gracefully. Since the musical’s release in 2012, fans have called for its return. Finally, after delays due to production issues, their calls have been answered as the musical will take the stage at the Sejong Center for the Performing Arts.

The musical tells the story of In-woo, a high school teacher who lost his first love, Tae-hee, due to a tragic accident 17 years ago. Only now, he realizes that she has been reincarnated as his student, Hyun-bin. Drama unfolds when In-woo is branded a homosexual due to his romantic efforts to awaken memories of the past from his pupil.

Much like the protagonists in the play, the actors have a lot in common despite obvious differences. Lee Ji-hoon, who plays In-woo, is a seasoned musical actor. After debuting as a high school singer in 1996, he established himself as a musical actor after 12 years of experience. On the other hand, Choi Woo-hyuk, who plays Hyun-bin, is a relative newcomer who got his big break in 2015 in the musical “Frankenstein.”

“[Choi] was a little shy the first day, but I knew he was acting. He showed off his true colors the very next day, teasing and joking around with me. I was also close with older actors in my twenties, so he feels like a younger version of myself,” said Lee Ji-Hoon.

Despite the tense romance that unfolds between the two protagonists, the actors comfortably laughed and made jokes between themselves.

Joongang Sunday, an affiliate of the Korea Joongang Daily, sat down with Lee and Choi to discuss their roles on stage and the musical. 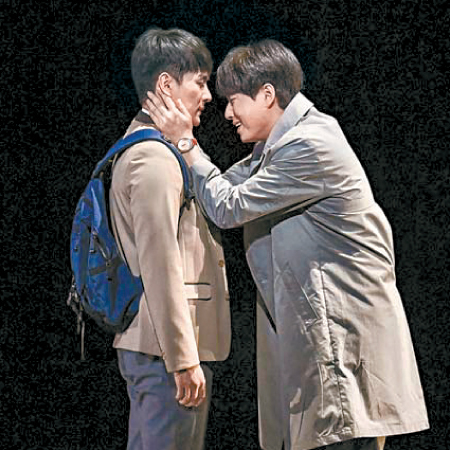 In the musical “Bungee Jumping on Their Own,” Choi Woo-hyuk, left, plays Hyun-bin and Lee Ji-hoon plays In-woo. [SEOJONG CENTER FOR THE PERFORMING ARTS]

Q. Did you have any hesitations about being in a musical with such unusual themes and venue?

A. Lee: Unlike big theaters with lighting and grand stage designs, smaller theaters demand that the actors to fill in those gaps. Actually, with its minimalism and simplicity, the musical is trying to appeal to a different kind of audience. Hopefully when female fans see the innocent and sensitive In-woo, they’ll think, “I want to bring him home.” (laughs)

Choi: At first, I thought I wouldn’t fit the role. My previous musicals were dramatic and powerful. This musical, however, was delicate in its dramatization. I still took the role because I wanted to do [a musical] that is heartwarming and play a role that could only be done at my age. I didn’t expect the experience to be this touching, though.

Why does the musical have fewer musical numbers than other musicals?

Lee: Typically, musicals are comprised of aria-like numbers that declare their entries emphatically. For this musical, the dramatic development is more embedded within the music itself in order to more accurately lead the story’s development. Background music is played in dramatic moments to convey the characters’ emotional transitions. That is the greatest appeal of this musical, I think.

Choi: This musical does have fewer musical numbers than others, but I never thought it lacked musicality. Unlike films that can portray the most delicate emotions, most musicals unfold with powerful and fast developments that audience members can easily miss in a blink of an eye. These musicals also have moments that can take away people’s attentions, like a stage transition and a background ensemble. For such a delicately crafted musical with such fragile sensitivity, a sense of restraint and quiet is needed in order for it to be appreciated.

Did the slow-paced love story bother you?

Lee: It does get to me sometimes, even though I was born between the analogue and digital generations. I still used pagers when I was in middle school, and it took forever to call someone. People had to wait over an hour when someone was late for a meeting [because people couldn’t call them], but the waiting was compensated by anticipation rather than frustration. So I was able to relate to the musical, but I suppose this kid here born in ’93 can’t. (laughs)

Choi: I’m not even familiar with a phone booth. My generation used online chatting to directly communicate, so we didn’t have to nervously wait for hours to confess to someone you liked them [as the characters would have].

Can you guys understand In-woo’s philosophy of “eternal love”?

Lee: In terms of love at first sight and the promise of eternal love, I wonder if I had, or ever will experience, something like that. Since I probably won’t, I thought it’d be worth a try at least on stage. I don’t think I’ll ever be able to express that kind of emotion after a year or two with the degree of dedication that I’m demanded to pursue in the musical.

You seemed to be emotionally immersed in the characters even at curtain call. Why was that?

Lee: Emotions came flooding to me near the end. My character loses everything when he is accused of being a homosexual, and even loses Hyun-bin after a tearful plea to the teenager to recognize him. Also, a torrent of emotions came over me when my character meets Tae-hee before her fatal car crash, and that [emotion] was hard to shake off. When the curtain went down, I was more overwhelmed by the characters getting back together than the relief of successfully finishing the performance.

Choi: The final scene involves both of our characters. If Hyun-bin is not moved by In-woo’s feelings, the emotions are lost in all characters, including Tae-hee. I feel like I hold the final key [to the climax] so I try to empathize with the feelings between Tae-hee and In-woo more than that of my own character. That’s how I think when I’m taking my bow.

What are your thoughts on the final line of the show: “I love you not because I want to but because I have to”?

Lee: I was moved during my delivery of it, and I felt a convergence of various emotions. People nowadays have relationships that don’t even last three months, but love is not merely an instant feeling of attraction. To love is to patiently wait for a person’s true side to eventually emerge. I think the line makes us reflect on that.

Choi: I like that line as well. I always concentrate on it when it’s being delivered on stage, and always wonder if I can ever find a love like that. It seems like nothing I have seen or experienced, but hopefully one day I will understand it, too.

The musical is being staged at the Sejong Center for the Performing Arts in central Seoul from June 12 to Aug. 26.