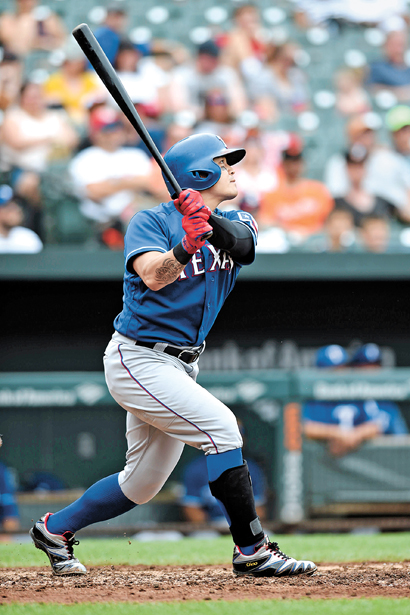 Choo Shin-soo of the Texas Rangers completed the first half of the MLB season with an impressive on-base record of 51 games, tying baseball legend Babe Ruth’s best streak. 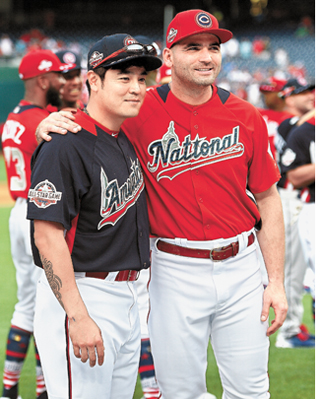 Choo Shin-soo of the Texas Rangers, left, and Charlie Blackmon of the Colorado Rockies pose during the All-Star Home Run Derby at Nationals Park in Washington on Monday. [AP/YONHAP]

A home run against the Baltimore Orioles on Sunday put Choo on Ruth’s level, although the Rangers went on to lose the game 6-5.

Home runs aren’t the only thing Choo’s been knocking out the park this season - he’s also taken down a series of MLB records.

At 51 games on base, Choo now has the longest streak of any active player in the MLB. He has also done enough to place himself amongst some of the greatest names in baseball history. Choo’s on-base record is now tied with Hall of Famer Ruth, arguably one of the best players in MLB history.

There’s still a long way to go if Choo wants to take the all-time record, held by former Boston Red Sox player Ted Williams at 84. If Choo continues his climb up the rankings he’ll soon pass more legends such as Barry Bonds, at 57, and Joe DiMaggio, at 74.

“Every hitter has a different goal, but my goal is always to get on base, get a hit, walk or get hit by a pitch,” Choo was quoted as saying on MLB. “It doesn’t matter. That mentality makes this on-base streak special. Experience is a big help. When you play this long, you see a lot of pitchers, different styles, different type of pitchers.”

It’s not only on-base that Choo has set a record for this year. Earlier this season, Choo surpassed Hideki Matsui’s 175 career MLB home runs to set a new record among Asian players in the big leagues. Choo completed the first half of his season with a batting average of .293 with 18 home runs and 43 RBIs. He is expected to easily exceed his career high home runs in a single season, at 22 set in 2010, 2015 and 2017.

Though Choo is in the spotlight for his records this season, he says he isn’t really thinking about it. Instead, he’s focused on staying healthy.

“I know my numbers are going to be there if I stay healthy,” Choo was quoted as saying. “Mentally, I had to get through the first two years of the contract. Now, I have a clear mind. I just think about one thing, and that’s how to help the team win.”

With such an impressive start to the season it came as no surprise that Choo was selected to compete in the MLB’s All-Star game this weekend for the first time in his 13 years in the league. By competing in the All-Star game, Choo will become the third Korean player and first Korean hitter to play in the annual event.

“I am very honored for my country, my family and myself,” Choo was quoted as saying. “When I came from Korea, I was 18 years old, and I had never thought about this. Now, I just want to play one game with the best players. That was my goal when I was in the Minor Leagues. A lot of baseball fans are very excited, so are my family and my parents.”

The All-Star Game will take place today at Nationals Park in Washington.

“I hope he soaks in every part of the All-Star Game,” Rangers manager Jeff Banister was quoted as saying. “I think that he should allow himself to appreciate the fact that he is an All-Star. And that is one of the higher recognitions that you can get as a player. He is such a humble human being that I don’t know if he’ll fully let himself appreciate the experience.”

The Rangers will resume the season with a game against the Cleveland Indians on Friday July 20 at Globe Life Park in Arlington, Texas.