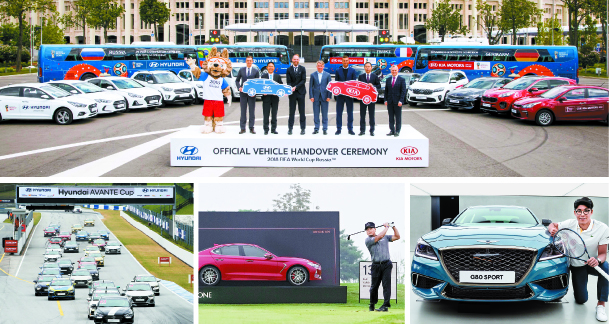 Top: Hyundai and Kia supported the 2018 Russia World Cup with vehicles and held a vehicle handover ceremony in Moscow. Bottom, from left: The Avante Cup was held in 2017 to help popularize motor sports in Korea; Genesis is trying to raise the popularity of men’s golf through promotions; Genesis has also sponsored tennis player Chung Hyeon and promised to provide him with plenty of support. [HYUNDAI MOTOR, KIA MOTORS]

They will be sponsoring FIFA until the 2022 Qatar World Cup and are looking forward to strengthening the status of their brands through global soccer marketing.

At the ceremony, Hyundai Motor delivered an official team bus with the slogan “Be There With Hyundai” for the 32 participating countries.

Kia Motors held an opening ceremony for the Official Match Ball Carrier with 64 children from 28 countries, and for the first time, an Indian child became the first ball carrier.

The campaign attracted 150 million views in six weeks with its slogan, “Be the First Indian Official Match Ball Carrier.”

Hyundai and Kia carried out various marketing activities to promote the brands throughout the 2018 FIFA World Cup in Russia. Hyundai Motor held the FIFA World Football Museum presented by Hyundai with FIFA exhibit to celebrate the World Cup from June 9 to July 20.

The goal of the exhibit was to introduce the heritage of football from the first FIFA World Cup to the Russia World Cup. It shared cheering songs from different countries to build excitement for the World Cup. Hyundai Motor is happy to provide sports entertainment to football fans and remember the FIFA World Cup’s historic moments.

The company has been conducting various marketing activities, including installing billboards in stadium, delivering official game vehicles and operating promotional booths during the competition period.

Kia has undertaken global promotion activities as part of its sponsorship and has raised the value of Kia Motors in the worldwide vehicle market, especially in the European market, where there are many tennis fans. Kia Motors and the Australian Open have had a partnership for a long time, and Kia has developed a faithful brand image.

The premium car brand Genesis has been giving prizes to the top 10 golfers with the most points in the KPGA Korean Tour since 2016. Since last year, it has also held the Genesis Championship, which has the biggest prize in Korean men’s golf competitions, to expand Korean golf culture and foster its premium brand value.

The 2018 Genesis Championship was highly anticipated as major Korea male golfers, including Choi Kyung-joo, Wi Chang-soo and Kim Seung-hyuk, participated. The competition was highly praised for providing a fresh experience to the audience and spreading golf culture in Korea.

Various food stands were set up at Gallery Plaza to provide high-quality food to visitors. Various exhibition and activity rooms, including for the Genesis GV80 Concept Car exhibit, golf competition and other cars, were also set up. After the third round was finished, the jazz concert Jazz on Green was held, which attracted about 1,500 visitors.

The Genesis Junior Skills Challenge was also held. It allowed major men golfers to give special memories to junior golfers.

Kia Motors has been sponsoring the KLPGA since 2011 and was chosen to become an official partner for vehicles for 10 years until 2020. This will work to improve its brand image.

Kia Motors will have opportunities to promote its brand to the golf fans by showing off its logo on the PR board, broadcast, website and documents from the competition. It will also provide the prize vehicle.

To thank buyers of Kia Motors’ flagship sedan from 2013, the company holds the THE K9 Golf Invitational competition every year.

K9 customers can participate in the competition, and 60 people (120, with a plus one each) were chosen as participants in the competition. Kia Motors also held marketing events, such as the K9 Members Lounge, a private lounge open during the Korean Women’s Open tournament.