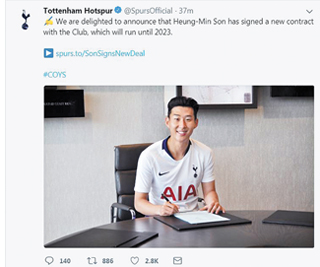 Tottenham said Son has inked a new deal that will run until 2023. His previous contract was set to expire in 2020.

“I’m very happy to sign a new contract,” Son said through Tottenham’s official website. “I hope I can see you this season at [the] new stadium.”

The 26-year-old has scored 47 goals in 140 appearances for the Spurs since joining the London club from German Bundesliga side Bayer Leverkusen in August 2015.

While announcing the contract extension, Tottenham confirmed that Son will play for Korea at the Asian Games and they are set to release the player after their EPL season opener against Newcastle United on Aug. 11.

“[Son] will also be available for our opening game of the Premier League season away at Newcastle United before traveling to Indonesia to represent Korea at the Asian Games,” the club said.

Son was named to Korea’s 20-man football squad for the 2018 Asian Games in Indonesia as one of the three overaged players. The Asiad is open to men’s footballers aged 23 or under, but teams can field up to three players who are over the age limit.

The Asian Games is not on FIFA’s calendar, and clubs are not obligated to release their players. But for Son, the continental event is important, since he can earn exemption from Korea’s mandatory military service, which is nearly two years, and extend his career in Europe without interruption.

All healthy Korean men between 18 and 35 must serve nearly two years in the armed forces. But athletes who either win an Asian Games gold medal or any Olympic medal receive exemptions. They then only have to undergo four weeks of basic training.

Tottenham added that Son will join their squad for their pre-season tour in the United States, where they will compete at the International Champions Cup (ICC), a friendly football tournament that features 18 top-class European clubs.

Mauricio Pochettino’s side are scheduled to play AS Roma on Thursday and FC Barcelona three days later. They’ll wrap up the ICC with a match against AC Milan on Aug. 1 and will travel to Spain for a friendly match against Girona on Aug. 4.

Tottenham’s announcement means that Son will not be able to train with the Korean U-23 team from the start. Korea’s U-23 football team head coach Kim Hak-bum will call up his Asian Games players on July 31 at the National Training Center in Paju, north of Seoul. His team is also scheduled to play a friendly match against the Iraq U-23 team on Aug. 9 before traveling to Indonesia the next day.

The men’s football tournament at the Asian Games is scheduled to be held from Aug. 14 to Sept. 1, but the competition period may start earlier with changes in the group stage draw. The organizers previously said they will conduct a new draw after they omitted the United Arab Emirates and Palestine from the initial draw. The number of participants in the men’s football competition at the Asian Games is thus set to increase from 24 to 26.