An Se-hyeon plans to make a splash

An Se-hyeon plans to make a splash 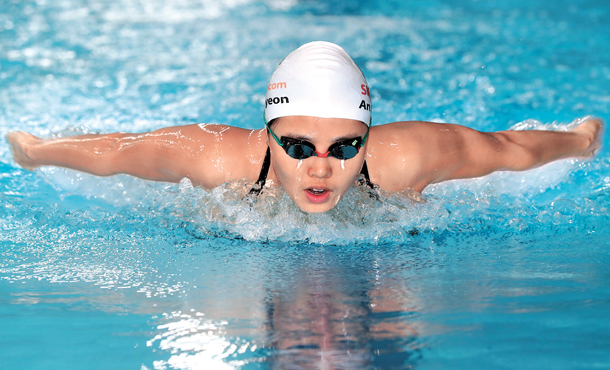 An Se-hyeon hopes to win gold in all five races she will compete in at the 2018 Asian Games in August. [CHOI JEONG-DONG]

For the first time in 12 years, Korea’s Asiad swimming dreams will not be shouldered by multi-gold medalist Park Tae-hwan. Instead it’s 22-year-old An Se-hyeon who, at her second Asian Games, will be carrying the hopes of a nation that has grown accustomed to gold medals in the aquatic events. An will aim for a gold medal sweep, an ambitious target for a swimmer that has never won an individual medal at an international event. 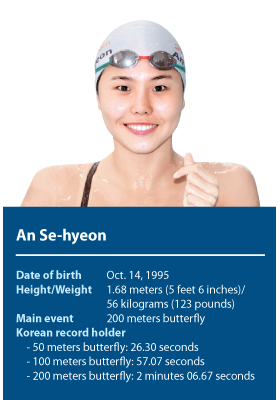 An has been making waves in Korean swimming as she has rapidly progressed through the ranks. During the FINA World Aquatics Championships at Danube Arena in Budapest, Hungary in July 2017, An set a Korean record in the women’s 100-meter and 200-meter butterfly with a time of 57.07 seconds and two minutes and 06.67 seconds. An finished fifth in the 100 meters and fourth in the 200 meters.

Though she didn’t win any medals, An’s times made her one of the fastest female swimmers in Korean history.

This year An hopes to be the fourth female swimmer to take home gold. She also hopes to be the sixth, seventh, eighth and ninth gold medalist - An will compete in five different events and is aiming for a gold sweep. Aside from the 100-meter, 200-meter and 50-meter butterfly, An will also compete in the 4x100-meter women’s medley relay and mixed 4x100-meter medley relay.

“There is not a single family member or a relative that swims or is an athlete,” An said. “I just started as a hobby, but now I’ve become an elite swimmer.”

Though she says she doesn’t come from an athletic family, she is built for speed in the pool - An has an arm span of 1.75 meters (5.74 feet), seven centimeters longer than her height.

“In water, arms are like legs,” said An’s coach. “When a swimmer has long arms then they can go faster in the water. It’s like how a runner with long legs has an advantage against a runner with shorter legs.”

When An first started swimming, she competed in both butterfly and freestyle.

“When I competed in meets, I won the butterfly but finished second in freestyle,” An said. “My coach said ‘let’s just focus on what you finish first in,’ so I specialized in butterfly.”

In swimming, butterfly is the last style the swimmers learn as it’s considered the most difficult. The rhythm of the swimmer’s stroke is crucial and improving their rhythm is the only way for a swimmer to go faster.

“I think the rhythm of butterfly fits well with my body,” An said.

Much like Park Tae-hwan, An often pushes herself beyond her physical limits. An has regularly trained so hard that she got a fever and her body came out in rashes.

“It was really bad in middle school,” An said. “After training, I had a high fever and had rashes from head to toe. Since I was young, I was embarrassed to walk around and keep my head up around people. But as my body got used to the intense training, the rashes started going away.”

Despite the intense training, An didn’t have big dreams as an athlete - she was happy to be winning domestic events. It wasn’t until SK Telecom offered her financial support to train and compete abroad that An realized there was a much bigger pond she could be swimming in.

“Once my view started getting wider, I wanted to compete against world-class swimmers,” An said. “I gained confidence after I finished well at the World Championships last year. I think I can do it.”

An’s best event at the Asian Games is likely to be the 200-meter butterfly as she does well over longer distances.