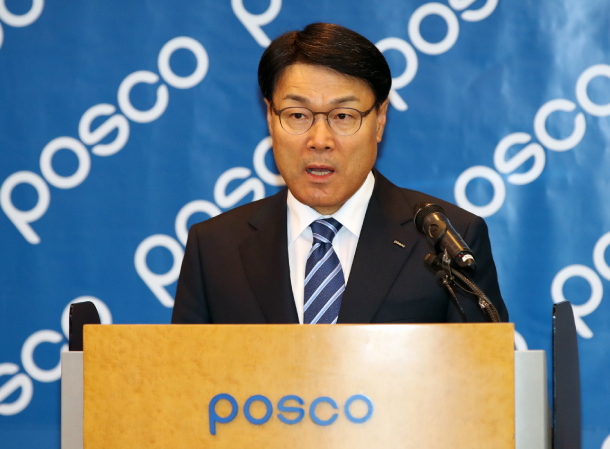 Korea’s largest steelmaker got a new chief Friday and a new corporate vision to build the business through “cooperation” with various parties including partners.

Choi Jeong-woo, former CEO of chemical affiliate Posco Chemtech, was approved as the ninth chairman of Posco at a board meeting Friday morning.

Choi has spent 36 years at Posco, serving in various positions including finance and business planning.

Since making the shortlist of nominees for the position last month, Choi’s background in non-engineering departments has been spotlighted. Posco’s previous chairmen all had backgrounds in metal engineering.

“I believe I have expertise in the steel industry, having worked for this company since 1983,” the newly appointed chairman said Friday at a press briefing right after the board meeting.

“I may not be an expert in steel engineering, but I am an expert in the industry. I have looked deeply into the costs of the engineering process and I know the overall flow of the process, which will help in coming up with a new strategy for the company,” Choi added.

Choi described a new vision for the company that he dubbed “With Posco,” pledging to fulfill the company’s responsibilities toward clients, suppliers, partner companies as well as to society.

In terms of business strategy, Choi said that Posco will continue to fortify its flagship steelmaking business while also concentrating on chemical materials needed for lithium ion batterries.

Affiliate Posco ESM is in charge of making the cathode materials and Posco Chemtech anode materials.

“Currently, the two materials are manufactured by separate companies, but to enhance efficiency in R&D and marketing, I believe combining the two processes might be required,” Choi said.

“With the development of electric cars, a 20 percent market share will lead to approximately 15 trillion won ($13.4 billion) of revenue by 2030,” Choi added.

Choi also hinted at bringing in outside experts to lead new business sectors.

Choi is known to have led a successful restructuring of Posco since 2015 as head of the value management team by selling non-core or unprofitable businesses and merging departments to enhance efficiency. Posco once had more than 70 affiliates. It now has only 38.